I thought it might be time for some sort of fancy homemade cake, like a Scooby-doo cake or a dinosaur cake or something of that ilk. My sister has a policy: to create any kind of cake her kids request. She has made, by hand, large orange T-rex cakes, bat cakes and volcano cakes that actually erupt. Not the kind baked in an expensive cake mold or smoothly iced and topped with teeny marzipan figurines; hacked apart 9″x13″ chocolate slabs fashioned into whatever my niece and nephews can imagine. They never seem to notice that her forte is math (she’s a teacher, and head of math, still not sure how we can be related), and not cake decorating.

But these are the very best kinds of cakes, don’t you think?

All he wanted for his 4th birthday was “the biggest chocolate cake you ever saw, with chocolate icing and sprinkles and fire on it.” By fire he means candles, or sparklers, or something hot he can watch and/or blow out. Sure, I can do that.

Rather than fall back on a chocolate cake recipe I already have I decided to try something new – this is an opportunity, after all, to pursue that elusive ultimate chocolate birthday cake that will remain forever on the birthday roster. I think I’ve found it. 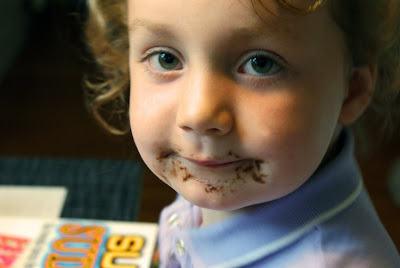 Rather than flip through cookbooks, I consulted one of my favourite food blogs. Turns out she has already done sufficient research on all of our behalves – lucky me. She (and approximately 1291 other bakers, according to Epicurious’ rating system) approved of a Double Chocolate Layer Cake created by chef Ed Kasky, and so I gave it a go. (She even conducted a blind taste test, and it won.)

I tried not to tweak it, I really did. But I could only find one deep cake pan, and it sounded like some bakers struggled with the wide, deep pan size anyway. (The cake is baked in 10″ round by 2″ deep cake pans, at a slow 300°F.) It occurred to me that it might be a perfect quantity of batter to produce one layer cake and some cupcakes to spare – I always worry that I won’t have enough – and even after keeping the guest list to family, kids on the block and a couple friends, we had a dozen kids and as many adults to feed. At a birthday party, you do not want to run out of cake. 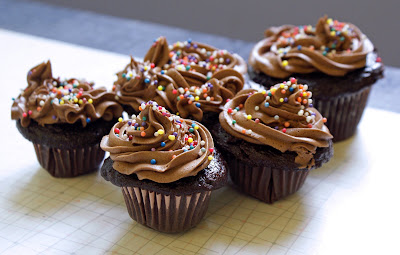 I was right – it baked two perfect 9″ layers and a dozen cupcakes, with even a little left for a handful of mini cupcakes for the toddlers. (Although the cake layers would have easily accommodated this extra bit of batter.) Everyone was fed, with a slice left over for my dad, who stopped by after work. 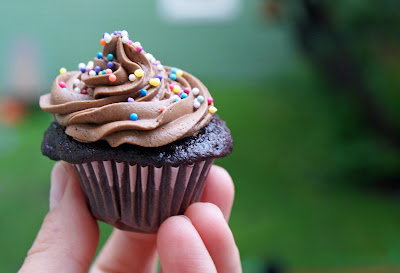 I love that this cake is made with oil – canola oil is what I bake with – and it’s easy to use coffee in a recipe if you keep a jar of instant (I like espresso) on hand. Don’t skip the part where they tell you to line your pans with waxed paper or parchment – the cakes are moist and will otherwise leave some of themselves behind when you flip them out. It’s easy to do – put a pan onto a piece of waxed paper and quickly run a pen around it (it won’t leave ink, only a visual ring), then cut it out and stick it in – the cheapest insurance ever. 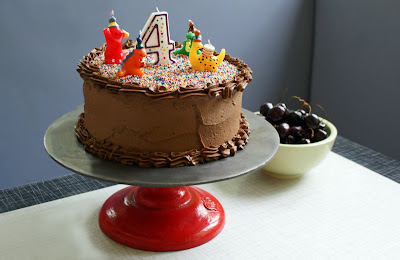 I only bothered with the cake part – kids don’t appreciate a good ganache, and W in fact prefers frosting, especially on a cupcake, and while the grown-ups certainly do, I didn’t want to bother with more than one batch. So I made a big bowl of chocolate buttercream – butter, Bernard Callebaut cocoa, icing sugar, vanilla, water – adjusting quantities until I had something fluffy and spreadable. I slathered it on the cake and topped it liberally with coloured nonpareils, then W helped me pipe the same onto the cupcakes. (Tip: freeze your cakes first to prevent them crumbing too much – frost them frozen, and they’ll thaw beautifully by the time you’re ready to sing Happy Birthday.) There was some left over, so I piped a bit around the cake edges too. Everyone raved. Even my Mom, who generally is only tempted by golden cakes, declared this one the Best Ever.

That was this afternoon.

Round two came afterward: my nephew turns 19 tomorrow, and so came at the end of the party and we transitioned into a birthday dinner for him – ribs on the barbecue, all the leftover salads from our hot dog bar at lunch, and his favourite – ice cream cake. 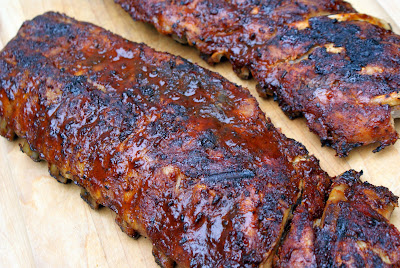 I used an Epicure Selections barbecue rub that comes in its own stainless steel shaker – doused the raw ribs, put them on a rimmed baking sheet, covered with foil and baked them at 300°F for 3 hours yesterday. You can do this a day or two in advance, and keep them in the fridge – when you’re ready to eat, slather them with bottled barbecue sauce and throw them on the grill to heat through. (This quick finish on the grill also keeps the barbecue sauce from burning.) 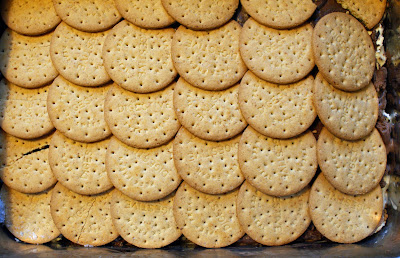 The ice cream cake my sister made was small genius – it’s a shame we were already full of cake and an afternoon-long lunch – she crushed Digestive cookies, mixed them with melted butter as for a graham pie crust, pressed it into the bottom of a roasting pan, chilled it, and spread a tub of softened chocolate chip ice cream and chocolate ice cream on top. Froze that, then layered whole cookies in a sort of scalloped pattern on top. Frozen, it cut quite nicely, if you ignored the odd broken cookie. 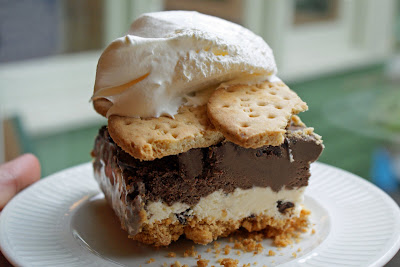 And who could care about broken cookies with this little treat around? (Only the cutest boy ever –
my nephew, Charlie. Don’t you just want to eat him up?) 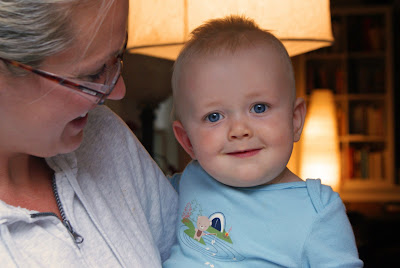 36 comments on “The Biggest Chocolate Cake”