What a week. I feel like I’ve been stomping out fires wearing impractical shoes. Some are effectively put out, others spread… and then there are the fireballs I keep dropping. All the while spending 3 hours of each day live on the radio, sleep deprivation and phlegm and all. Which may not always be the best idea.

Yesterday was W’s very first playschool party, for Valentine’s Day. The note home to parents instructed we bring a small snack “such as hummus and pita”. I love hummus and pita as much as the next guy, but did that mean no pink cupcakes? would sugar cookie hearts be frowned upon? Did I have to bring cut-up veggies? I spent far too much energy agonizing over what exactly it meant, deciphering and deconstructing it as if I were fifteen and it was a note from a boy. I finally settled on popcorn. Festive, right? Kids love it, right? It dodged concerns over nut, wheat, dairy and egg allergies, if there were any. W made a play for pink popcorn, and I might have gone ahead and made a batch if I had an hour and a box of raspberry Jell-O; instead I drizzled the popcorn with melted butter and olive oil and grated Parmesan cheese as it tumbled warm from the hot-air popper. I’d have added pepper, too, if the bowl weren’t destined for a room of three and four-year-olds.

The party was a mob of cuteness: preschoolers clamouring to put paper hearts into each others’ pink and red bags, then sitting in a circle in their slippers singing “You Are My Sunshine”, at which point it was all I could do to not deliquesce into a snotty, sobbing puddle in the mini wooden kitchen area. The parents, I have to point out, were a perfect splits of moms and dads – seven of each – I do love this community. And the food – most homemade, and one batch of Rice Krispie squares, made by a dad who also happens to be a chef – see? chefs make Rice Krispie squares too, with sprinkles even, when they have adorable little girls. 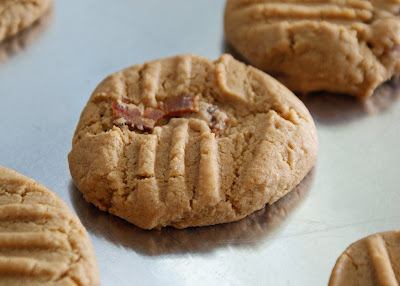 And while I’m documenting the few things that came out of my kitchen this week, I should probably mention the peanut butter and bacon cookies I made on Tuesday to bring to the studio. I’d heard rumours of peanut butter bacon cookies and how delicious they were. I had seen recipes that call for drippings, but I used my standby peanut butter cookie recipe (1 1/2 cups peanut butter, 1 cup white or brown sugar, 1 egg white; roll into balls, press with a fork and bake at 350F for 12ish minutes) and stirred in some chopped bacon only because a few cooked slices had found their way into my fridge when my folks emptied their fridge of perishables before leaving town. A tasty experiment – only a few people were revolted by them. And not because they looked a little scabby.

Dinners? Remember those things I used to report on a daily basis? They’ve mostly been from the freezer, although Mike did make a batch of dough while I was at work today, which I turned into a pizza at close to 7. W, fooling around, leaned in to take a lick of the crust seconds after I pulled the sheet from a 450 degree oven, pressing his chin against the hot metal; I’ve spent the last hour cuddling him and watching Shrek with a cool cloth on the red welt under his lip. Which hasn’t been a bad way to spend the evening, really. (For me – not so much for him.)

And HEY! Blog Aid! We’re in the final stretch! I’m just totally blown away by everyone’s generosity. We’ve decided to wrap up this project tomorrow – Friday February 12th – to coincide with the Canadian government’s program to match donations to aid organizations working in Haiti. So if you don’t have your copy, you have 12 more hours to order one. Or two. Or ten.

You can order your copy here.

Enormous thanks again to West Canadian Graphics and Blurb for making this happen. And of course to the lovely, generous and talented Cathryn Ironside, and all twenty-seven food bloggers who contributed photos and recipes. We’ve sold another 90 since dinnertime! Yahoo.