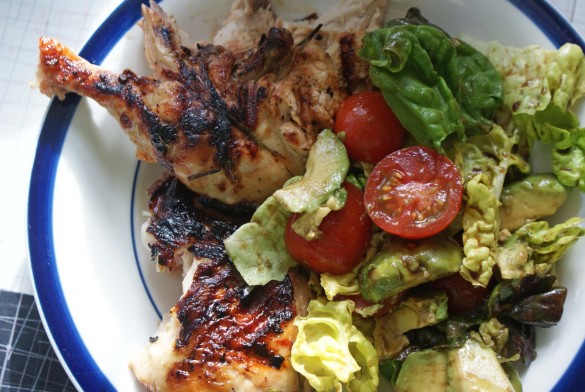 It turned out to be a mighty fine dinner tonight, if I do say so. And a bit of a miracle that it even came to be. At 5 I had no dinner plan in mind. Rummaging through the fridge unearthed a nice little organic chicken I picked up at Bite yesterday for $7 (!) that needed to be cooked, and decided for some reason to finally try chicken under a brick. Or – chicken under a skillet. (Who has bricks?)

Why is it that I decided to learn to butterfly a chicken and attempt a brand new recipe when everyone was hungry and it was closing in on the 6 o’clock news? I think partly because I feel a bit displaced from the kitchen these days – constantly writing about food, yes, testing stuff but not cooking a proper dinner as often as I’d like to lately. My sister is back in the hospital, the boys were filthy, and I was dropping balls all over the place. I found enough space on my counter for my laptop and looked up instructions on butterflying a chicken (you cut out the spine and open it like a book – easier than the term “butterflying” may suggest) and did it in a couple minutes. Plopped the spineless bird into a big bowl and poured orange juice over it, then added a dribble of olive oil, a couple sprigs of rosemary and a few cloves of garlic while running back and forth out front, where the boys were playing (W: “ow!” Me: “what happened?” W: “I probably shouldn’t tell you”). 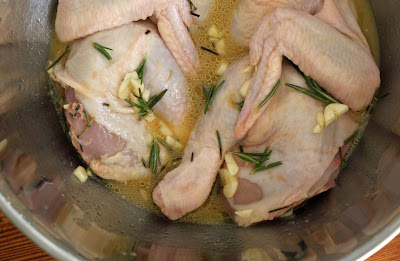 It really wasn’t that difficult. I don’t know why I haven’t tried it before. You open the chicken like a book and toss it on the grill. Throw the spine in the freezer for stock.

There are a few good recipes to be found out there, but it’s really the cooking technique that’s worth sharing – beyond that you could really do to the chicken itself anything you might do before roasting it in the oven. Marinate it or not. Brush it with oil and sprinkle with salt. If you use barbecue sauce, add it toward the end of the cooking time, so that it doesn’t burn. 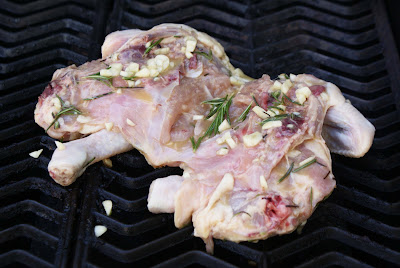 Preheat your grill to medium and toss it on, skin side down. 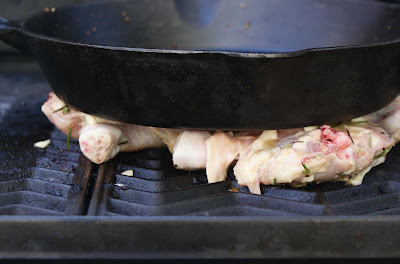 If you have bricks, wrap them in foil and set them on top. If you don’t happen to have bricks around your kitchen, set a cast iron skillet on top of the chicken – it works perfectly. Close the lid. (Do remember to use an oven mitt when you open the lid and take the pan off. Ow.) 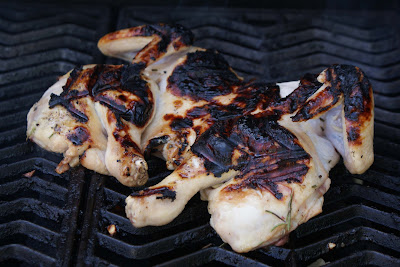 Ours was a smallish bird – flip it after about 10 minutes. Put the skillet back on and close the lid again for 15-20 minutes. 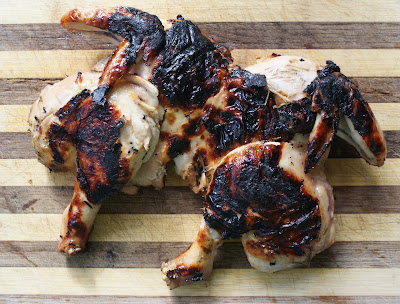 As soon as it’s done, take it of and let it rest for a few minutes. This should give you enough time to tear some butter lettuce into a bowl with small tomatoes and thickly sliced ripe avocado, and shake some canola oil, balsamic vinegar, grainy mustard and maple syrup in a jar to drizzle overtop.

14 comments on “Chicken Under a Skillet”