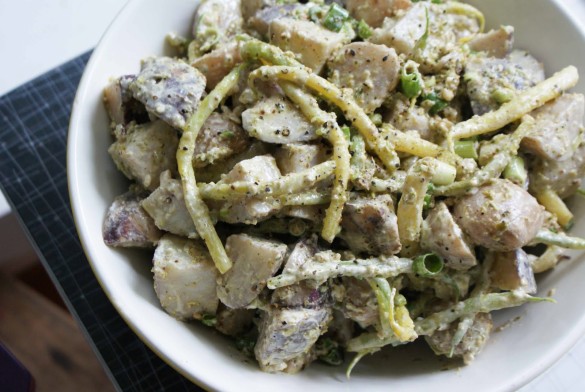 Dilemma: what does one make when asked to attend a potluck picnic for two dozen or so local food bloggers, all of whom will presumably go home to their computers to document the eats of the day? Rather than debate what might be most easily transportable, crowd-pleasing, visually stunning or dinner-party impressive (baked Alaska? too melty. Crêpes Suzette? too French) I figured I’d use some of the dandy purple, pink and white thin-skinned spuds I’m starting to have more of than I can use, and the pale green and yellow beans that came in our CSA box this week. Of course I’m still hopelessly hooked on that garlic scape pesto. And I wanted everyone at said picnic to have garlic breath as distinct (emphasis on stinct) as I.

The potato salad was easy – I won’t complicate things by writing out a recipe. (Also? I’m lazy.) I boiled (I usually roast, but wanted the potatoes to suck up all that garlicky pesto) thin-skinned white and purple potatoes, tossing in a big handful of green beans (stems trimmed but not the curly ends – who would want to get rid of that?) for the last few minutes of cooking time. Drained the lot and tossed it with the last of the garlic scape pesto. (You could use any bottled pesto, but the garlickiness of this one was quite stellar here.) I made it on Saturday night (having plans Sunday morning immediately before the picnic) and put the bowl into the fridge, uncovered, to cool down. We sat on the front step and visited with neighbours. They grew in numbers and we wound up with a small party. Which meant waking up Sunday morning and realizing that my beautiful bowl of potato salad was a sort of pale grey shade. Which was a great excuse to mask it a little with mayo I made in approximately two minutes – I smell another post coming on – and the way the mayo made the oily pesto a little creamy was divine. I chopped in a few green onions, too. Eggs would have been good. I forgot.

It was a stunning potluck. (Have I expressed how enamored I am with the concept of potlucks? Love them. And who cares if you wind up with 20 potato salads? Guaranteed they’ll all be different.

In attendance on Sunday afternoon: Vincci (who organized the whole thing) from Ceci n’est Pas un Food Blog, Chelsey from The Crazy Kitchen, Pierre from Kitchenscraps, Lauren from Celiac Teen, Jennifer from Chocolate & Ginger and Wendy from Clearly the Place to Eat. 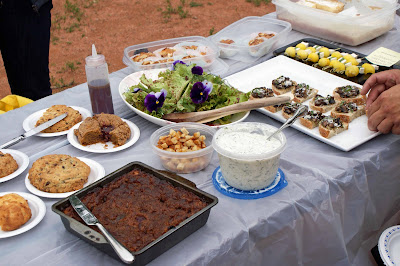 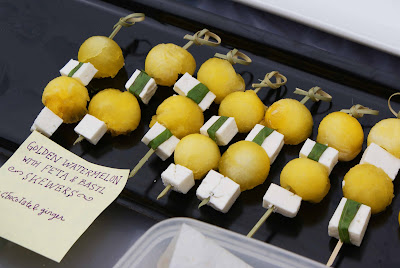 We had skewers of golden watermelon and cubes of feta wrapped in a strip of basil. 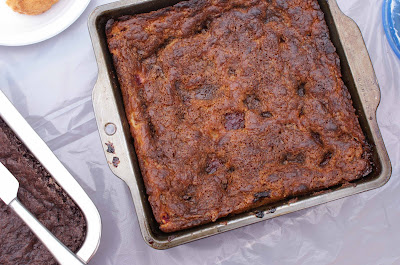 And gluten-free plum cake baked by a teenage genius (I would never have known it was gluten-free!) 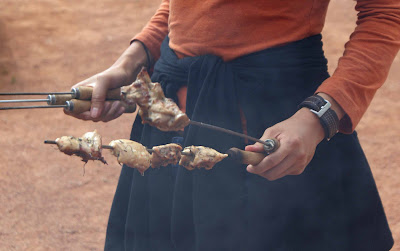 And marinated chicken thighs cooked over an open fire! 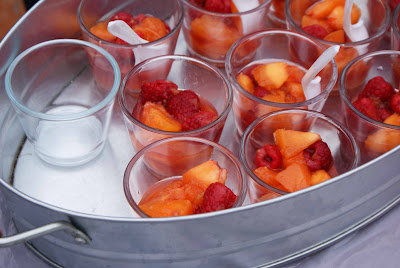 And there were phenomenal lemon squares that I seem to have missed because it’s quite difficult to photograph something whilst shoving it into your mouth.

It turned out to be perfect timing, as we were headed to Mike’s mom’s house for dinner afterward. She’s very sweet. But to sum up her culinary mind: she’s been cutting the fat off her pork chops and saving them in a plastic bag in the freezer for me. She knows I like to cook, and thought I might be able to do something with them. Any suggestions?

22 comments on “New Potato Salad with Green Beans and Pesto”