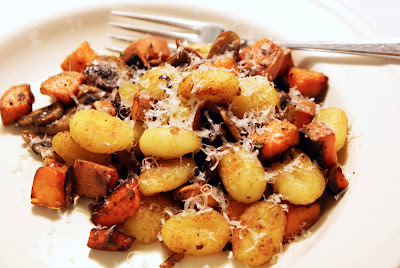 I’ve made gnocchi, and ordered it at restaurants, but never bought it at the grocery store – this was a total impulse buy. It was fine – like plain pasta that needed some dressing up. In this case I resurrected some mushrooms, sauteing them with butter and garlic after doing the same to a diced sweet potato. I had seen this, but mine was far, far more streamlined.

It would be a waste to write out a recipe, not that I’d remember it anyway. Heavy cast iron skillet, canola oil and butter, diced sweet potato, then mushrooms and garlic. Boiled gnocchi tossed with all of the above, plus a glob of butter left to melt, then turn golden and nutty in the pan with the browned bits in the bottom. Easy to stab at with a fork at my desk on nights when it’s already dark by 4 o’clock.

12 comments on “Gnocchi with Roasted Sweet Potatoes and Mushrooms”