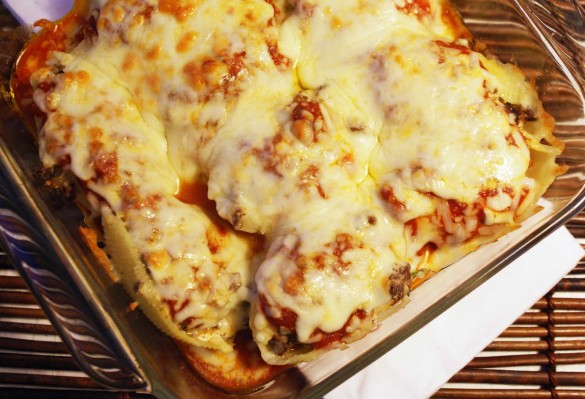 So Friday morning, you may have heard, I did a cooking segment on BT at the new Le Creuset store in Chinook (yes, I’m working on free stuff here! there are channels to go through!) WITH the firemen from the 2011 Hot Stuff calendar. Yes, my job does not suck at all some days. Although it must be said that Jill had a little more firefigher attention than I did. Possibly a lot.

We cooked with beef – ground sirloin, which comes from a single cut (sirloin) rather than a bunch (which you typically get with ground beef), which I like the idea of, plus you get the taste of a steak in ground form. Bonus: ground sirloin has about the same amount of fat as the extra-lean ground beef you’ll get at the grocery store, but with far better flavour and texture. Our theme was cooking with beef and beefcakes, surrounded by Le Creuset. Forget whiskers on kittens – these are a few of my favourite things. The coffee at Phil & Sebastian right next door completed me.

We made shepherd’s pies, a beefy Moroccan dish with olives and couscous, and these stuffed shells.
(Or rather they made them, under my -loose- direction.) They had it covered. They did a little improv. When the second wave of firemen arrived to eat, the consensus was the stuffed shells were their favourite. They’re like little two-bite lasagnas, filled with beef, spinach and ricotta and topped with melty cheese. How could you not adore them? I must admit I’ve always wondered who buys giant pasta shells to stuff – but despite their slipperiness and the fact that several tore or broke and were nibbled on by W or fed to the dog, I’ll be making them again. It was quick – I cooked up the beef, onion and garlic while boiling the shells, added it to some ricotta and spinach (the second time I added a spoonful of pesto, too), spooned the mixture into the shells (kids love getting in on this part, and it wasn’t at all finicky), poured sauce over, sprinkled with cheese and baked until bubbly. Easy. They freeze well (before baking), so you can make a big batch, divide it between two baking dishes, eat one right away and freeze the other for another night. Bake it straight from frozen.