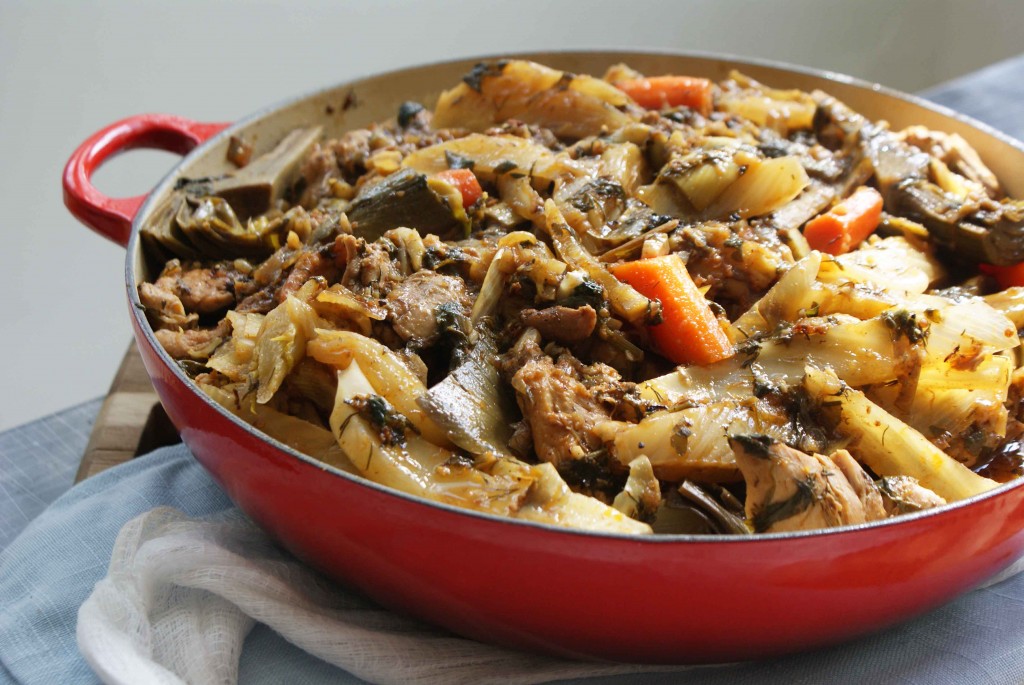 Awhile ago I was auctioned off at a live auction – at a fundraiser for Neighbourlink Calgary – and so today I made dinner for 10 for the highest bidders. On the menu: potato, lentil and spinach samosas with fruit chutney, Gouda gougères, curried mango chicken in wonton cups. roasted tomato and red pepper soup, caramelized onion and cambozola flatbread, chicken tagine with spring vegetables and couscous, spinach salad with purple onion, oranges and pumpkin seeds, and roasted asparagus. For dessert, ginger crème brûlée with caramelized pears and brown sugar-vanilla shortbread.

Just got home. Am v. tired.

Luckily Sue was here this afternoon to be my artichoke wingman as this was my very first attempt at this particular tagine, which was made with skinless, boneless chicken thighs, onion, lemon, fennel and artichokes, trimmed and quartered and choked and bathed in lemon water as they waited to go into the pot. It was all very simple (once we navigated our way around the artichokes, which I’ve worked with before but not enough), yet slightly beyond my normal realm. I’m happy to have been forced into simmering loads of onions and garlic with lemon zest, ground coriander, paprika and handfuls of fresh parsley, dill and mint – a combo that would never occur to me. It worked out very well, simmered in a pot then transferred (as it cooked down) to a wide braiser, and fed 10 enormously, with plenty of leftovers. The recipe came from the April, 2003 issue of Bon Appétit. Ah, 2003.

I’ll share the ginger crème brûlée recipe soon – that was in fact my own dinner, at around 10pm – it elicited more yummy noises than the any other part of the meal. (Essentially I simmered slices of fresh ginger in cream, then strained it before going about making crème brûlée the usual way.)