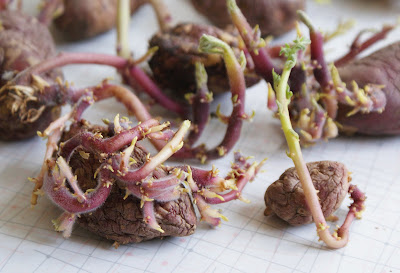 I went to W’s school this morning and built a potato condo with his kindergarten class. I highly recommend doing this if your kids’ teacher lets you – I brought a copy of Two Old Potatoes and Me to read beforehand, then the kids got to scoop dirt and plant potatoes, and all thought it was very cool. I love that the knowledge of how to grow their own potatoes is now somewhere in their wee brainpans. Maybe some of them will go home and ask their parents to grow their own potatoes in their own backyards or on their balconies. Maybe they’ll teach their kids how to grow potatoes. And so on. 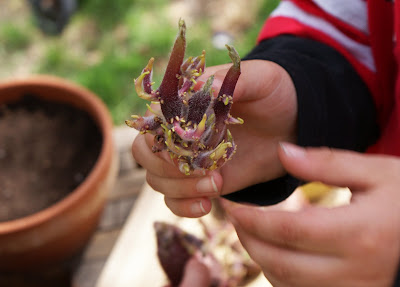 We made our own last week, which once you drill holes in the bottom of your garbage bin takes all of about five minutes. I keep eluding to it on twitter, and people keep asking what the hell I’m talking about. So let me explain the concept of a potato condo, and how to make one, even if you’re not a gardener nor have space for a full-on garden. If you have room for a garbage bin, you have enough to grow a good-sized crop of potatoes your very own self.

I know, potatoes are cheap – but the satisfaction of going out to your back yard, thrusting your hand into a container of dirt and pulling out clusters of wee new potatoes to rub clean and cook up for dinner is (nearly) free. As you probably know, potatoes grow underground, but grow up toward the surface, rather than down, like most root vegetables (picture a carrot, leaves growing up, root growing down), which is why they are generally planted in little hills, with provide extra dirt for them to grow up through. Make sense? A potato condo allows you to grow lots of potatoes vertically by adding more dirt as the potato plants grow to the surface. It’s also a great way to contain them, taking up little space in relation to the yield. The first (and probably most) potato condos were made out of wood, with new sides added on as the plants grew, but I’ve seen and heard of potato condos built out of old tires, milk crates and garbage bins. Last year we built one out of a galvanized steel bin I had initially tried to turn into a smoker. (Which, not surprisingly, didn’t work.) This year there are plenty of spare plastic garbage bins around as the city has supplied us all with their own black bins. I’d love to see those unused garbage pails growing food rather than filling landfills. 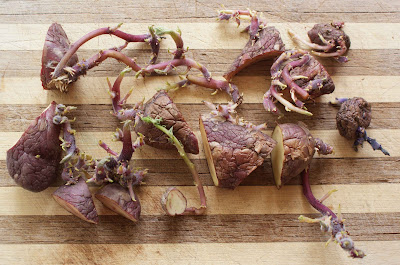 To grow potatoes, you start with seed potatoes -essentially potatoes which have been allowed to sprout eyes… you may have inadvertently produced your own seed potatoes in your own kitchens by leaving them in the bottom of the bin. The potatoes we used were from last year – mostly from our CSA farm – stored in a cool, dark place they practically turned into potato plants right there in the depths of my kitchen. To make your potato condo, first drill a few holes in the bottom of your garbage bin to allow extra moisture out – this will prevent your potatoes from drowning and/or rotting. I put a few near the bottom but on the sides, so they can’t get blocked underneath.

Then put some dirt into the bottom of your condo. Cut your seed potatoes into chunks, making sure each piece has a sprouting eye. Place them in the dirt, with the eyes upward, and cover with about 6 inches more soil. That’s it. Water and sun. They’re pretty low maintenance, actually. 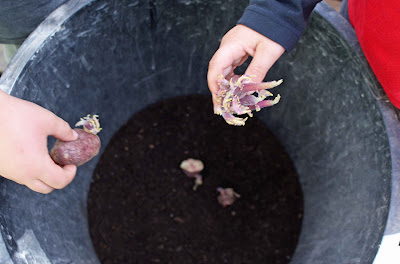 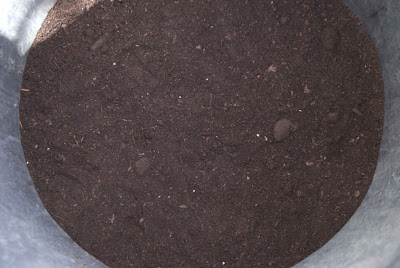 Once the leaves poke through the surface and manage to grow several inches, cover them with more dirt and compost. This encourages the plants to keep growing more potatoes, growing upward. Once it starts to flower, you can dip your hand into the dirt and feel around for new potatoes to pull out – just be careful you don’t disturb the root system. 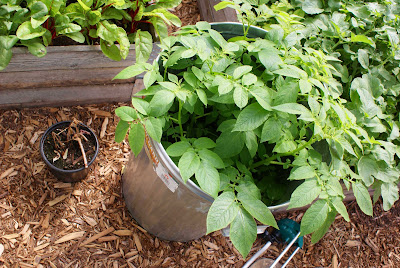 Your full harvest won’t happen until the fall, when it grows chilly and the above-ground part of the plant withers and dies. Then you can tip over the bin and sift through the dirt to harvest your potatoes. You won’t believe how many you’ll get. If you build a potato condo, keep me posted!

49 comments on “How to Build a Potato Condo”