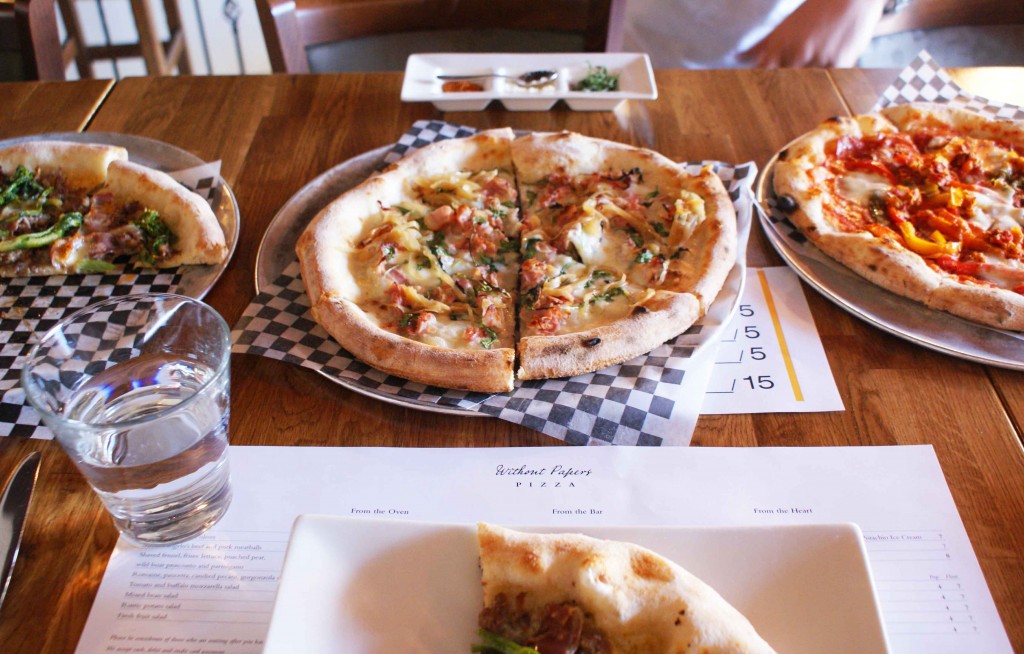 This was just one of the edible highlights of a week that has ended on the couch with my laptop, some sangria (a good compromise between orange juice and wine-both!) and a box of Kleenex. And, ironically, Mike ordering pizza on account of the cold that has just snuck up and smacked me upside the head. From the inside.

John Gilchrist, Tony Spoletini and I were enlisted to spend the week with Kristen and the BT crew in search of Calgary’s best pizza. Which meant a view similar to the one above at around 7 each morning – we visited Il Centro on Monday, Una on Tuesday, Tom’s House of Pizza on Wednesday and Without Papers on Thursday (the contenders were selected by vote, not by us), to sample a variety pies. A tougher job than I gave my gut credit for, actually. I could have very much used a nap each morning by 9.

Without Papers in Inglewood won by a slice. 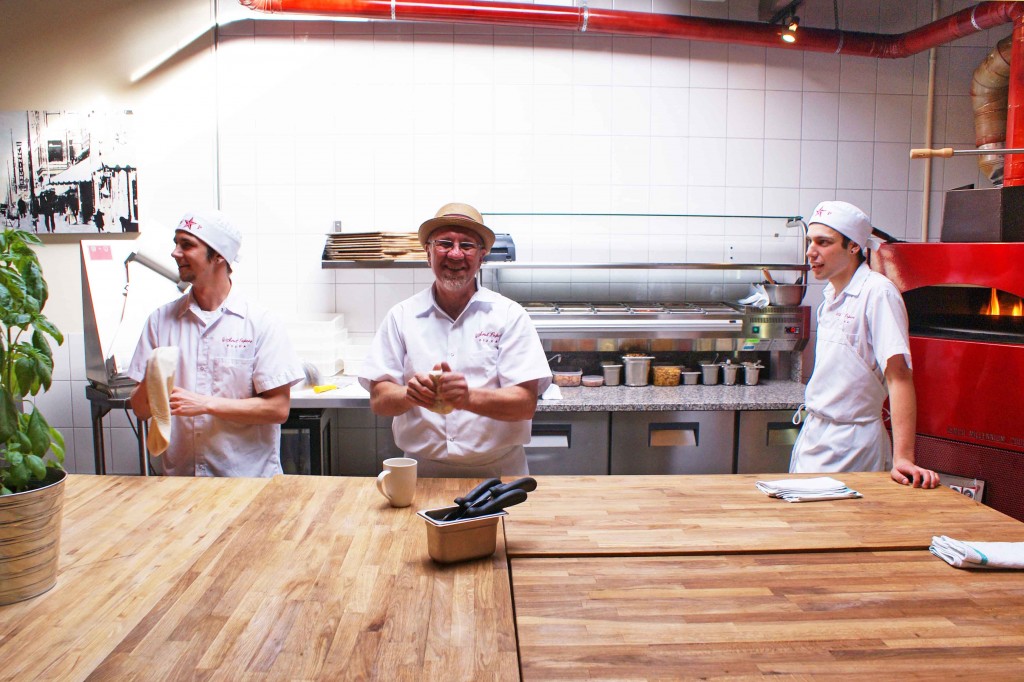 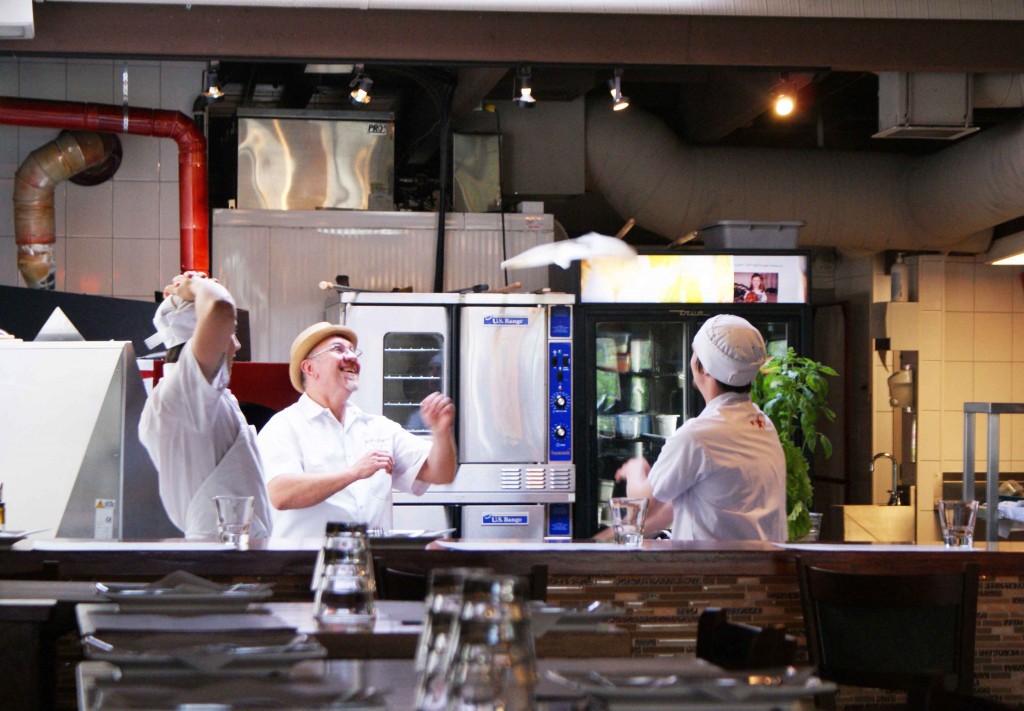 There was lots of dough flipping under the skylight in between hits. Tony got the hang of it too. 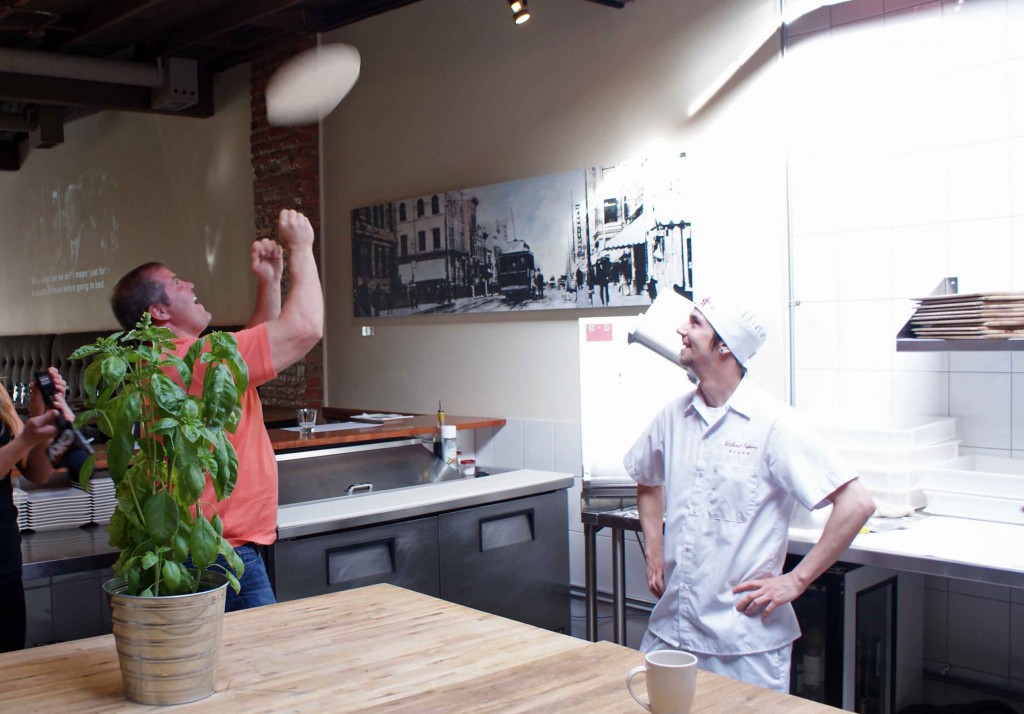 Tony and Angelo played football together at St Francis high school howevermany years ago. They brought old helmets and yearbooks and told stories. 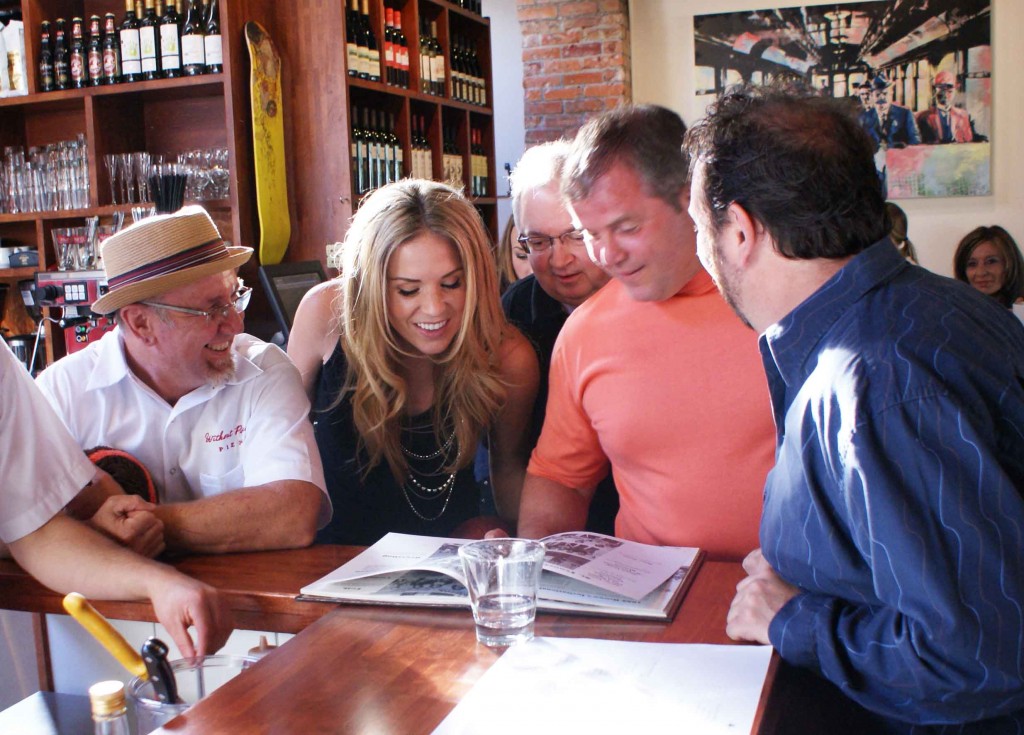 This is Kristen. I made her pose like this because of the shot on the back wall – see it? – one of the best parts about Without Papers is the old movies they project on the walls. Because there’s no sound, Mike often fills in the lines himself. Which is far funnier than having the sound on. 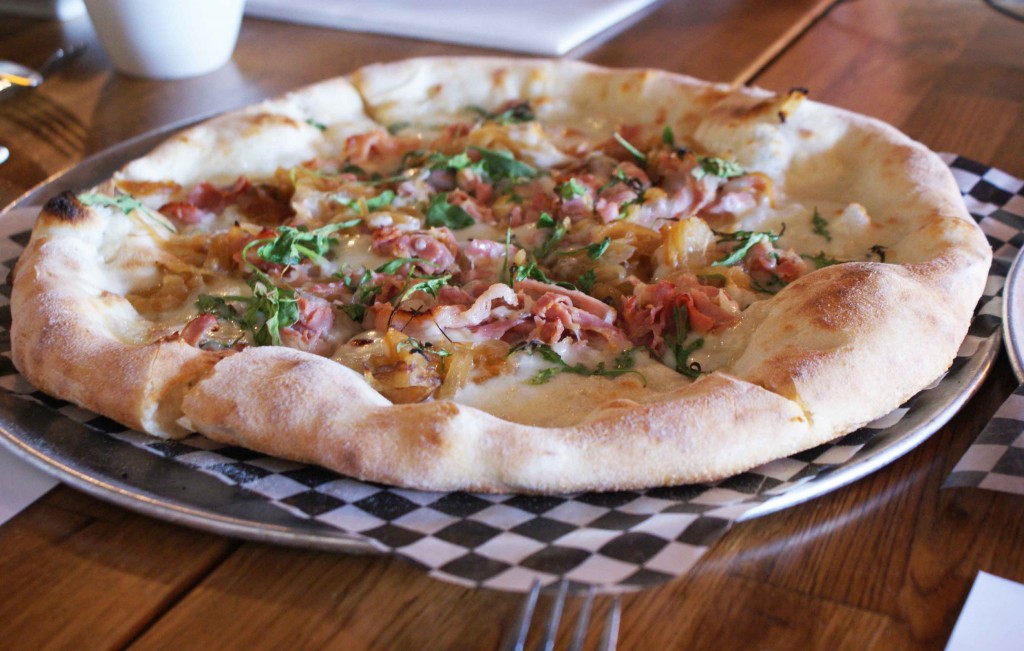 We ate a lot of pretty fantastic pizza this week. All of the contenders are well worth a visit.

I’m sad it’s over. I was getting used to pizza and laughing for breakfast. 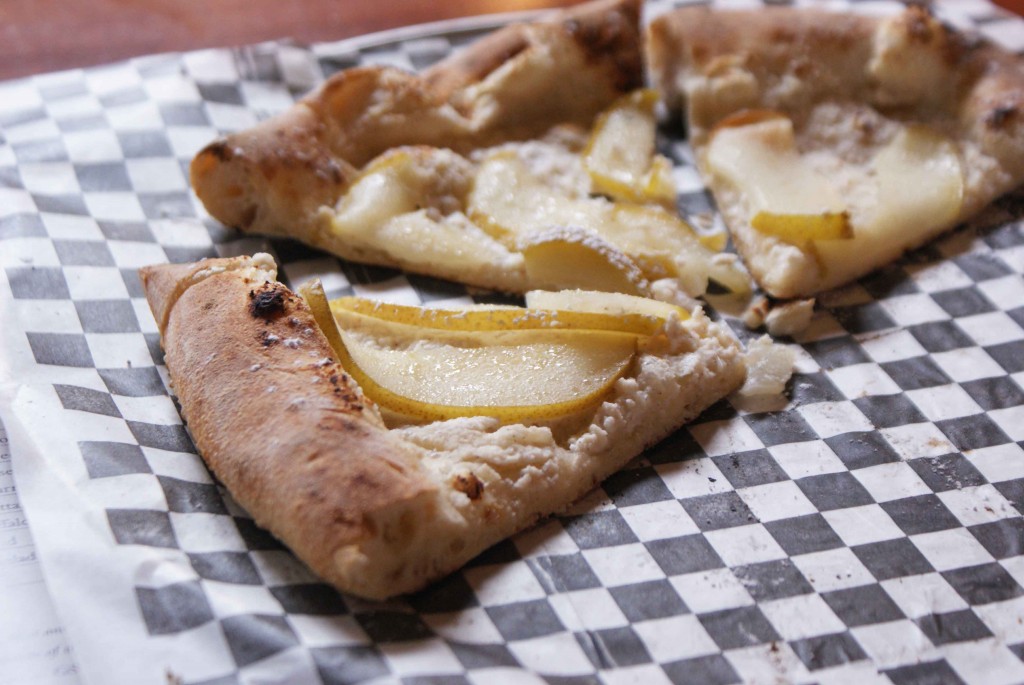 But. Did I mention they named a pizza after me? 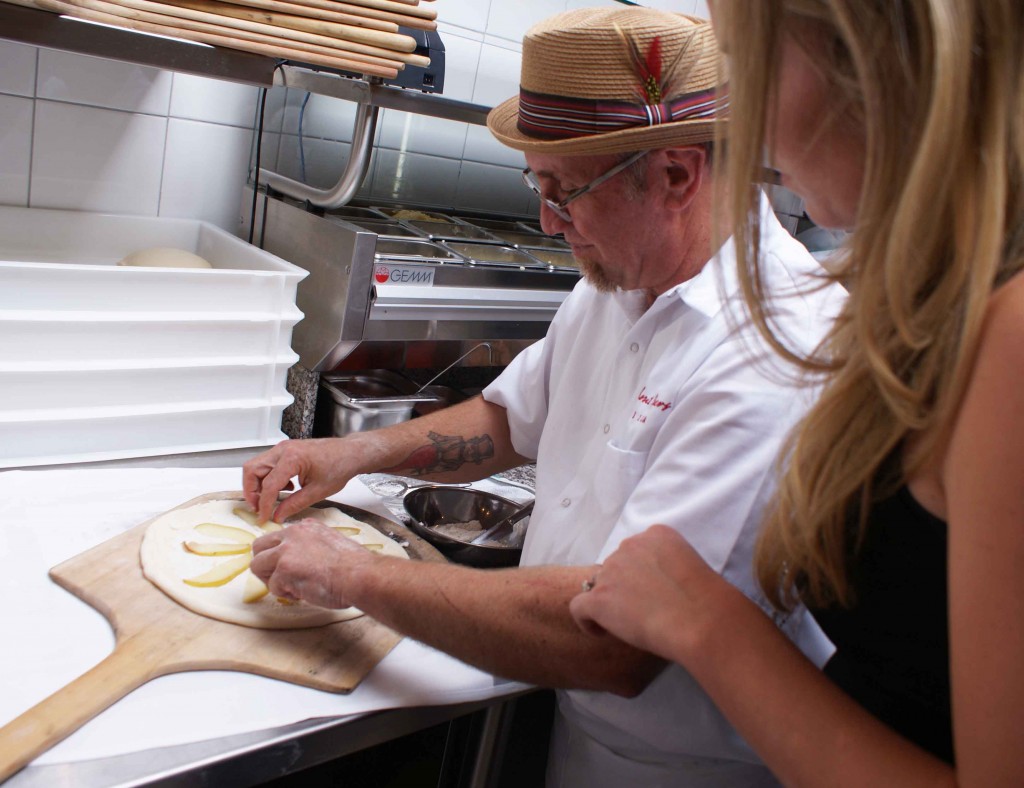 It’s only fair. You can get a John Gilchrist at Il Centro, and Tony claims the Hog Wild at WOP is named after him. So Angelo whipped up a sweet (!) dessert pizza with fresh ricotta, pears poached in red wine, and a drizzle of Nutella. It will be on the menu all this weekend, or until they decide to yank it and/or name it after someone else. Or replace me with a boozy tart. 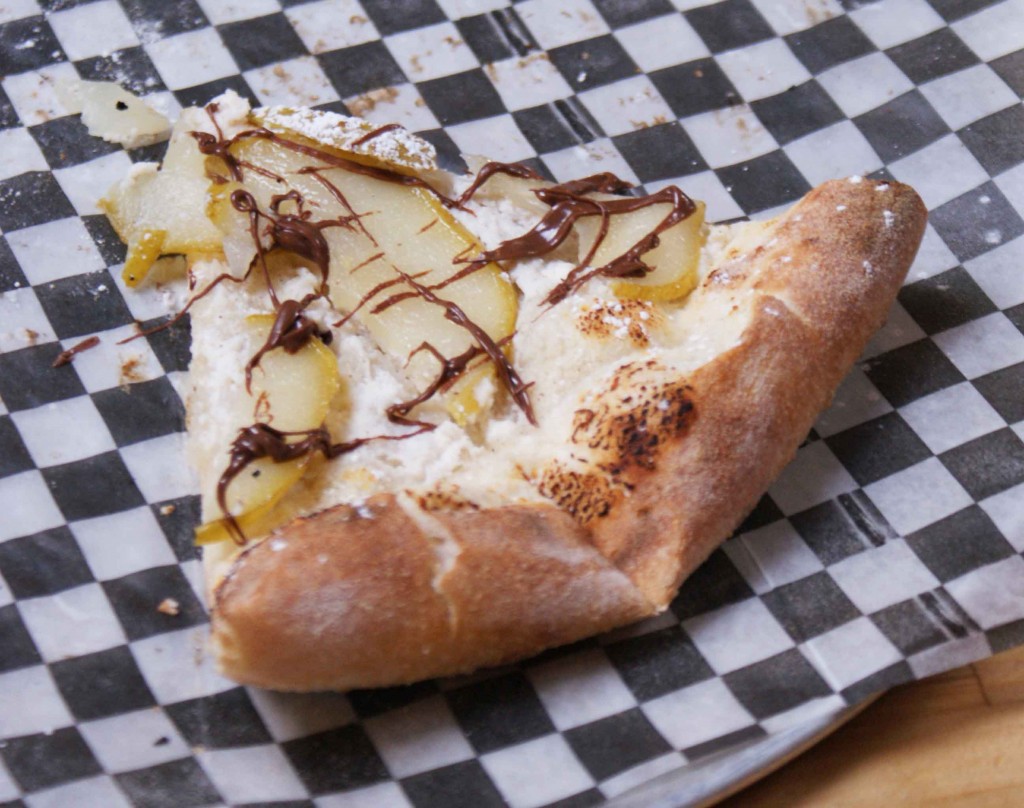 So we’ll be there tomorrow afternoon – on Saturdays (at 3? 4?) they project kids’ movies on the wall, and sometimes they let W go to the computer and choose – you can bet I’ll be taking advantage of ordering a me pizza while I can. And another Prosecutor, and maybe a Hog Wild. But we’ll start with a Julie. Having your own pizza is better than having your own action figure.

(Wanna go? I have a $25 poker chip to give away for Without Papers!)