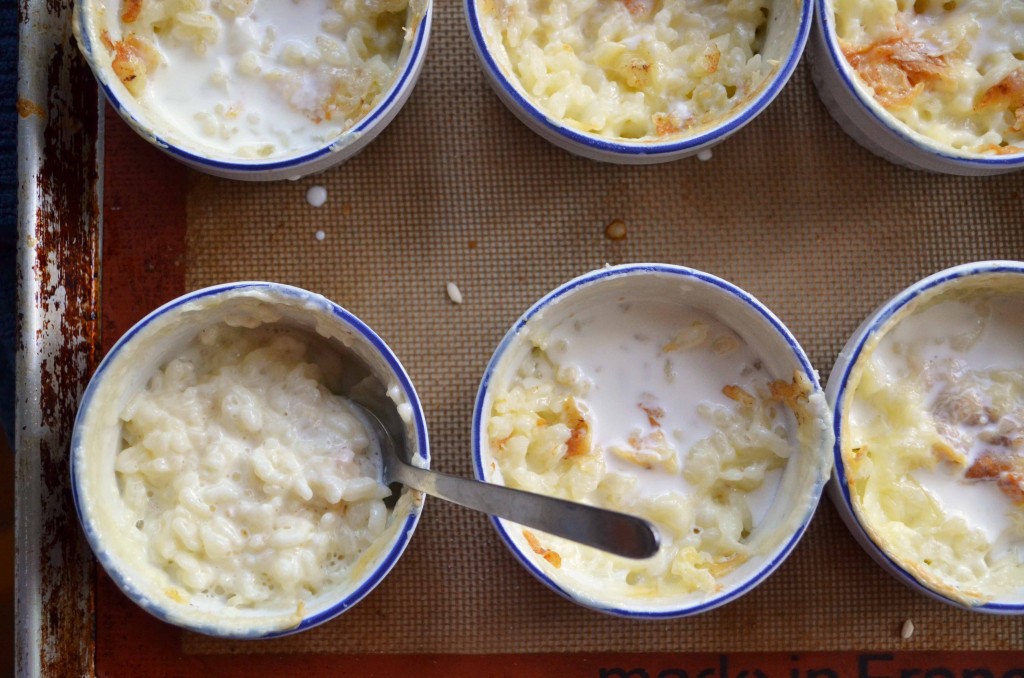 This week needed to end with a wee ramekin of baked rice pudding, and some red wine, and a good book. If I had it my way all Sunday nights would wind down like this.

The week culminated in a dinner party at the home of a couple who purchased me at a silent auction at a fundraiser a year or so ago, and so wanting to pull off a fun evening, I made curried sweet potato, carrot, ginger & red lentil soup, prawns in fenugreek cream, and enlisted their help (there was an element of teaching in the evening) in assembling a large batch of the Nenshi family samosas. For the main course: Vij’s chicken curry, chana masala, roasted cauliflower, curried peas and paneer, spiced beef short ribs, homemade naan and marinated green beans. For dessert, vanilla & ginger crème brûlée (great recipe, but I cut the sugar in half and it was plenty sweet) with Tonka bean shortbread. There were leftovers, and so my family came for dinner tonight.

Rather than replicate the crème brûlée (I couldn’t face another 10 egg whites in the freezer) I recalled a recipe for individual baked rice puddings I had wanted to try. The method could not be more simple – set out as many ramekins as you want rice puddings (if you set them on a baking sheet lined with a silpat mat, they won’t slip around) and get out a bag of short-grain rice, some sugar and milk or cream and your measuring spoons. 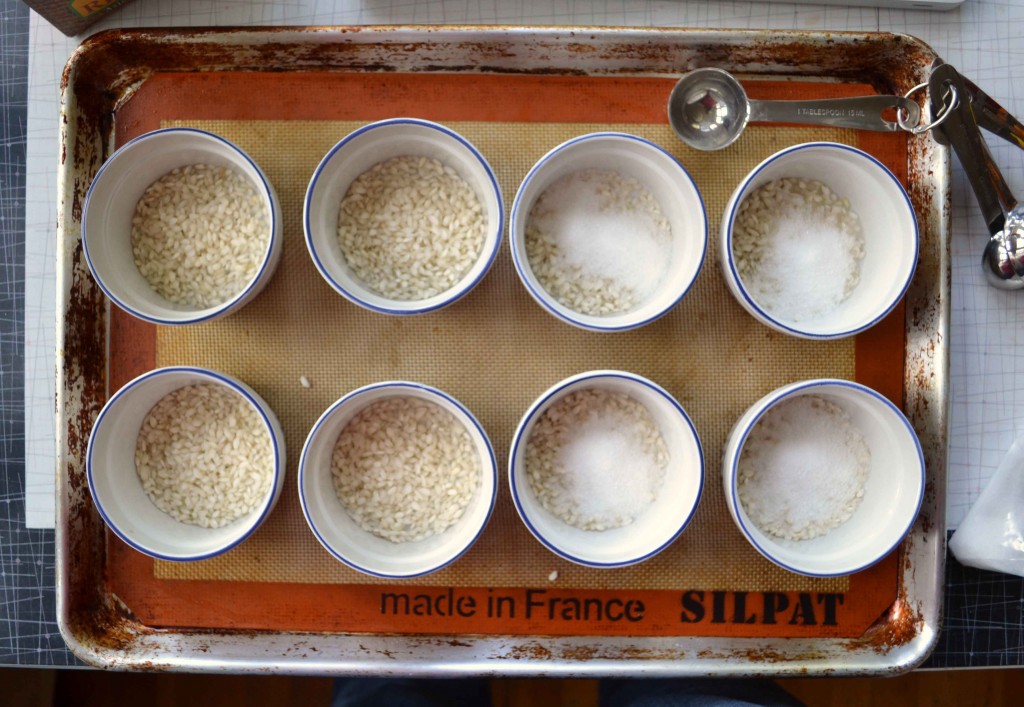 Put a heaping tablespoon of short-grain (Arborio) rice, two teaspoons of sugar and a half cup of milk or cream (half & half or heavy – it’s up to you) in each ramekin. I had infused my cream with ginger already, which is to say I put it into a saucepan with a few slices of fresh ginger and turned up the heat until it was steaming. You could do this if you like. If so, strain out the ginger or pick out the slices with your fingers. (Don’t burn yourself.) These ramekins? Two for $1.25 at Dollarama. 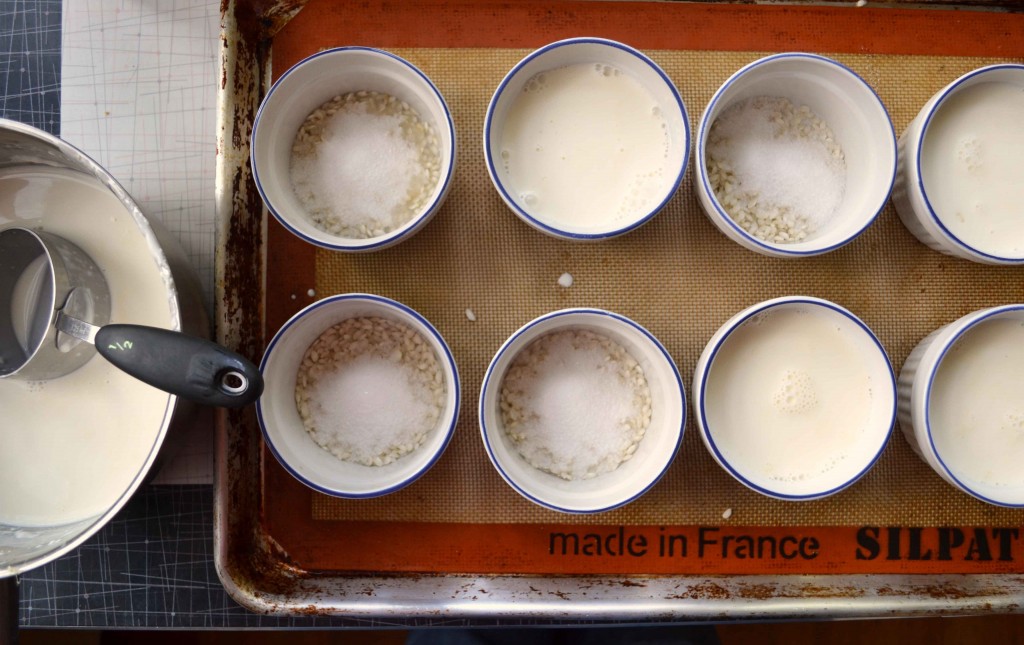 The recipe says to grate a little nutmeg over each after adding the milk. I like this. But if you plan to pull off the pudding skin, you’ll lose much of the nutmeg, too. Next time I’ll grate it over the rice and sugar before pouring over the milk or cream. You could add a bit of vanilla, as well as or instead of. Or use brown sugar for a more caramelly rice pud. Flavour them however you like, really. 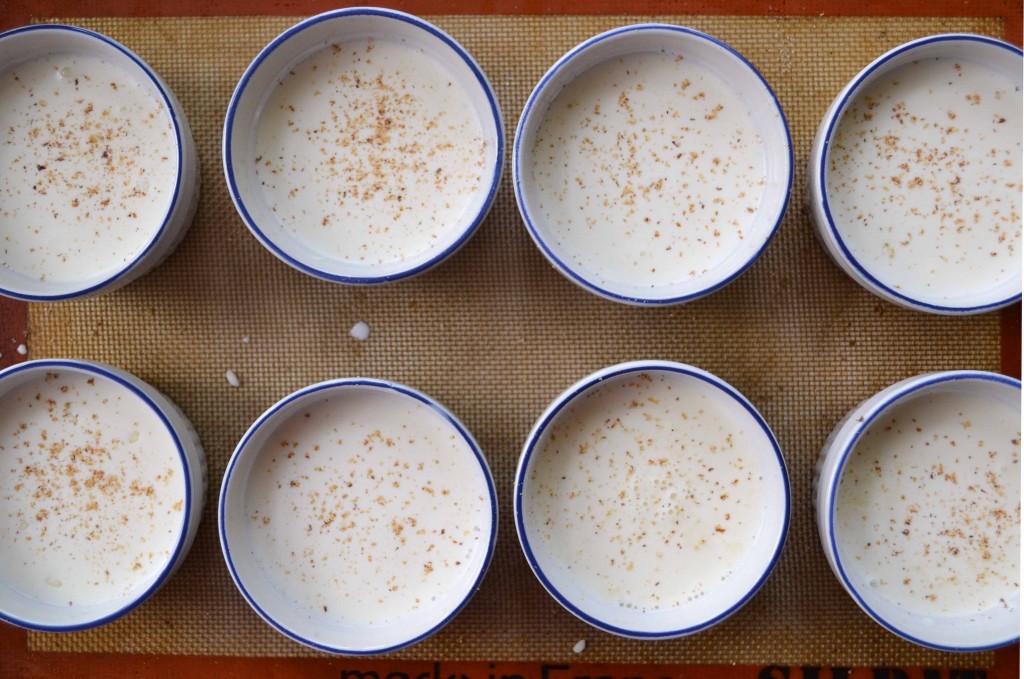 Bake them at 325°F for an hour. I love that you could bake one of these, or two, or ten, it doesn’t matter. If you have a cake or loaf baking, you could tuck a few into the oven alongside. They will puff up, then sink back down. The edges of the ramekins will wind up coated with caramelized milk. 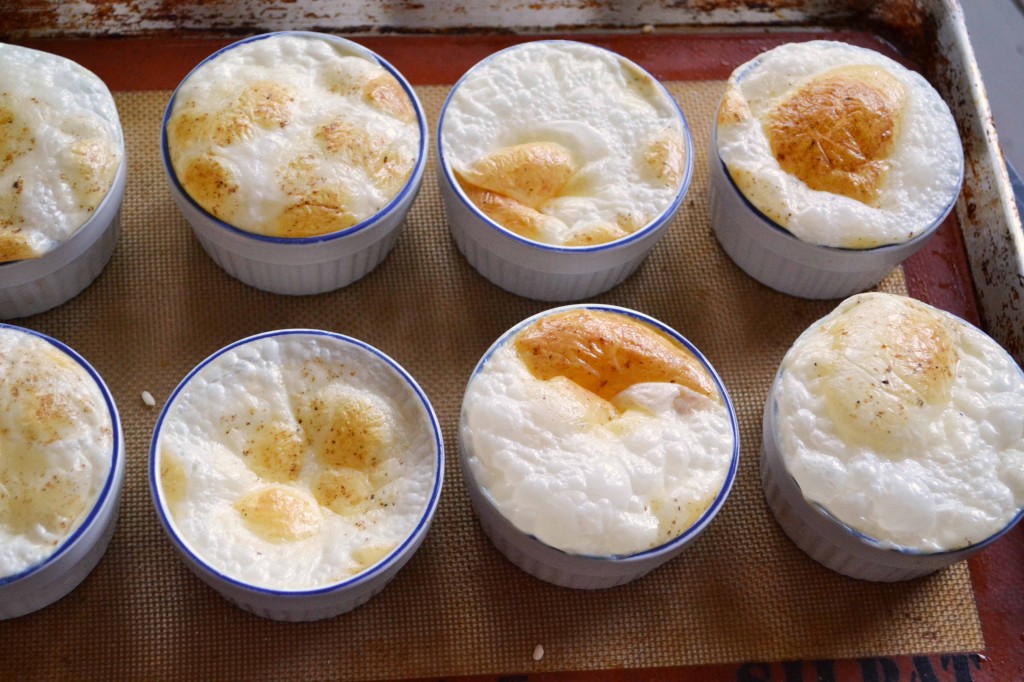 Once they settle back, they will be warm and thick and sweet – at this point, the recipe instructs pulling off the golden rice pudding skin. This is like the dessert equivalent of pulling the skin off a roasted chicken and eating it yourself. 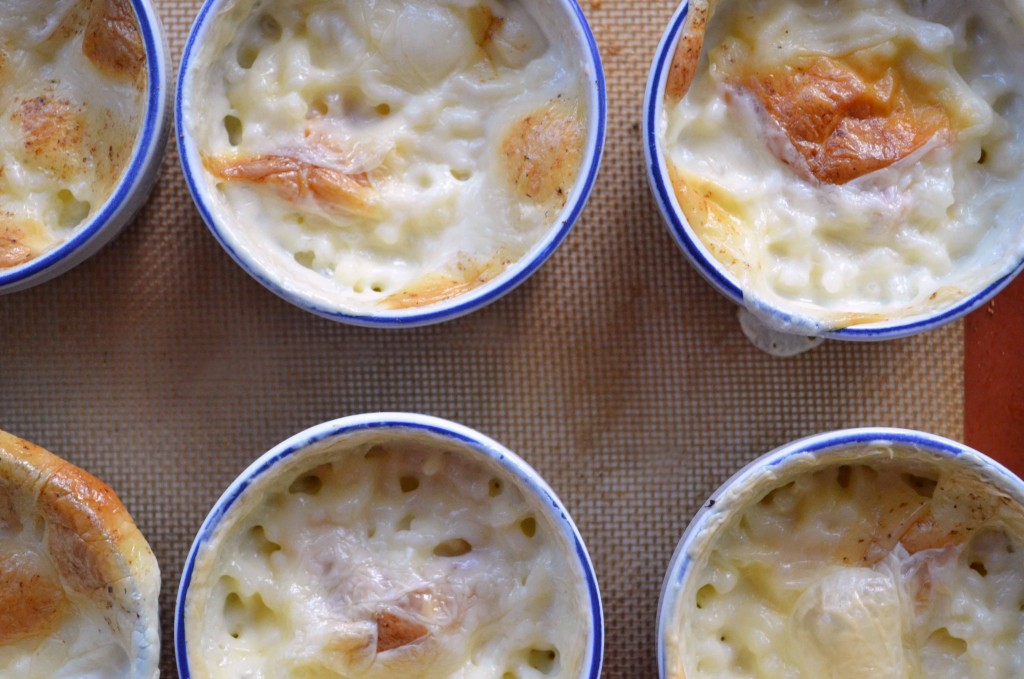 Add about a tablespoon (feel free to free-pour) of cream to each ramekin and stir it in; this will loosen it up a bit and make it far creamier. At this point you could stir in a few raisins, if you’re that type. Eat it warm or chill it, or chill it and then brûlée it – sprinkle a layer of sugar over and torch it or run it under the broiler until it caramelizes, then chill until it’s hard enough to crack a spoon through. You could conceivably have a stash of these single-serving puddings in the fridge, and brûlée one or two each night as needed. Apply directly to face; repeat. 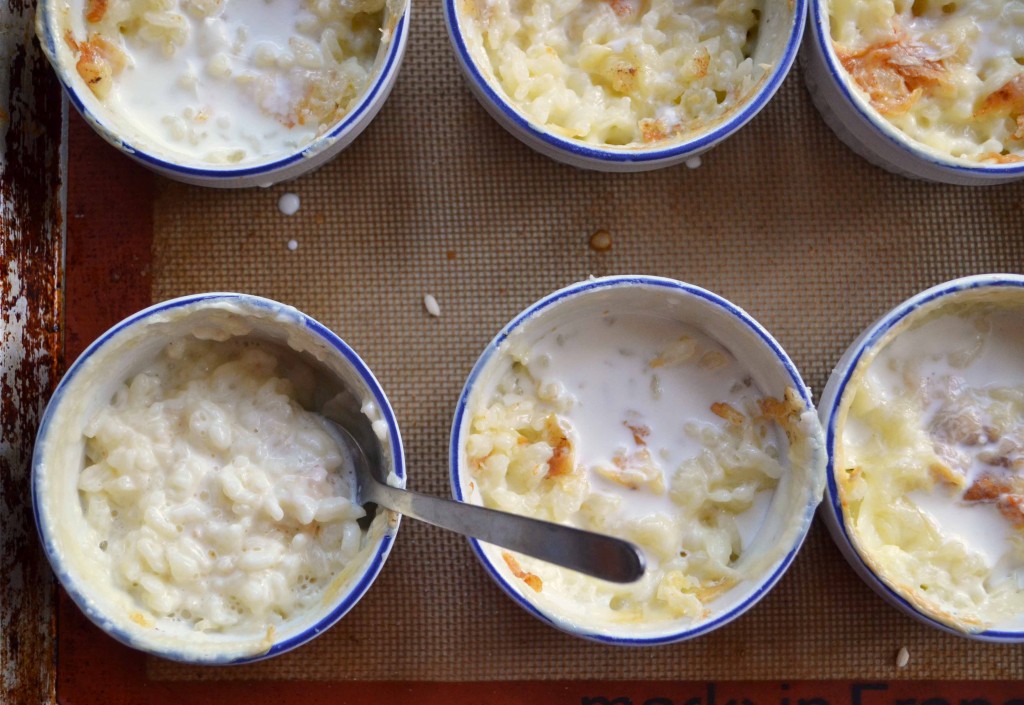 I love too that you don’t need a recipe for these; I can imagine years down the road making these little rice puddings on autopilot, tucking them into the oven (or toaster oven) when dessert is called for. Or breakfast. Or a warm and comforting after-school snack.

While I have your attention – I was thinking we should have another get-together. The mother of all cookie exchanges! What do you think? A cookie party to follow the pie party?

I’m thinking Saturday the 10th. Save the date! Or at least a couple hours in the afternoon.