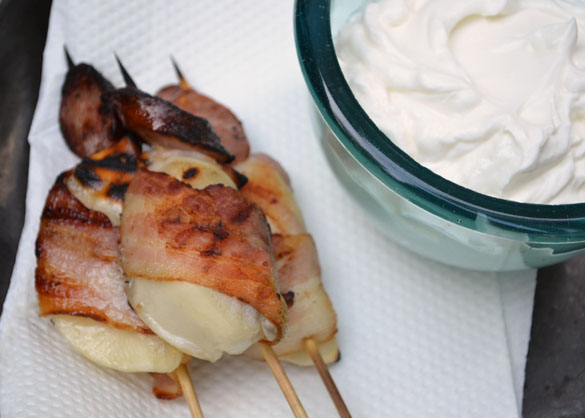 So over the Stampede, we had a few get-togethers. All involved food on a stick – deep-fried or not. 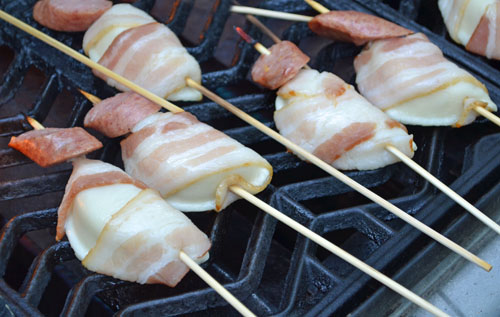 I tweeted out a picture of these bacon-wrapped peroghies on a stick minutes before putting them on the grill, and the twitterverse screamed out for a recipe. You won’t need a recipe per se, but here’s how you do it: boil peroghies of your choice, drain them and set them out on paper towel – if they’re too wet they’ll be slippery to wrap. Cut regular bacon in half crosswise, and wrap each peroghy with a piece of bacon. Soak some bamboo skewers and poke them through, making sure it goes through a corner of the bacon on each end of the peroghy. That’s it. 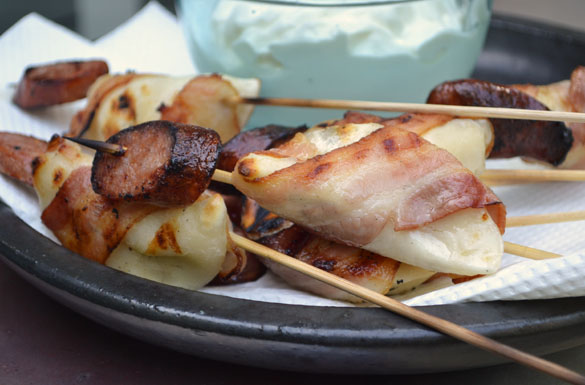 I had some Spragg’s sausage, and so sliced it and slid a piece onto each skewer at the end. You could do this, or not. Or thread two peroghies on each stick – whatever works for you. Preheat your grill and cook them over medium (so you don’t incinerate your skewers), turning as the bacon cooks and shrinkwraps each peroghy. Serve with sour cream for dipping, and cold beer for washing them down.

18 comments on “Bacon-Wrapped Peroghies on the Grill”