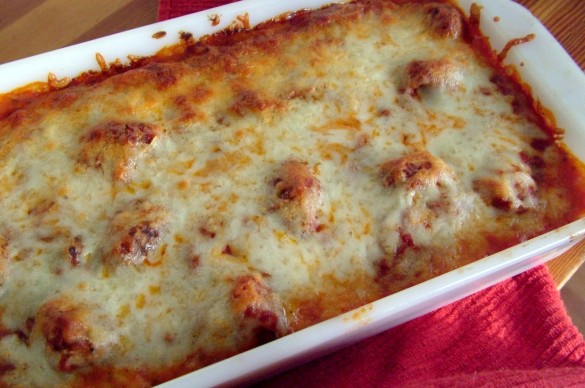 I know, I know. What sane person makes cannelloni from scratch for dinner on a regular Wednesday night?

Someone who became frustrated with the bulky stack of fresh pasta sheets congesting her deep freeze and hastily pulled them out yesterday, thinking she’d come up with some brilliant use for them.

I’ve never actually made cannelloni. When I assisted at a pasta class with Lina several months ago, she left a whack of pasta sheets behind, which they didn’t want to store in the fridge at the Cookbook Company, so I took home. Since then, they have been taking up valuable space in the frozen food section. About a month ago I taught another class with her, at which she demonstrated how to make cannelloni. Seemed easy enough – in the class we stirred together ricotta and thawed frozen spinach, spooned it down the long edge of a pasta sheet, rolled it up, cut it and baked it with pasta sauce poured overtop. I dug around the fridge and voila! A half container of ricotta; luckily it has a lengthy shelf life. I consulted a few websites and noticed that most didn’t bother adding an egg to stabilize their cheese fillings, so I didn’t. Unfortunately I didn’t have anything green – spinach or chard – in the fridge or freezer, but I did dig out a baggie of frozen roasted red pepper (roasted red pepper freezes beautifully, and is perfect to stash in baggies for emergency pizza toppings, salads, and dips), which I chopped and added to the ricotta along with salt and pepper, amusedly imagining how totally gourmet my slap-together dinner was going to sound when I posted it. It’s funny how everything sounds fancier when you spell it out. I also pulled out two small Italian sausages that weren’t substantial enough for much else than pasta sauce. After thawing them I mildly regretted having bothered, but they were already thawed so I quickly cooked them up and poured the tomato sauce over top. So the rolled cannelloni, which I filled, rolled up, didn’t use anything to seal, then trimmed and cut widthwise into thirds (I trimmed because it seemed to be I didn’t want the pasta to be three-ply…) and set in a baking dish in a puddle of tomato sauce to keep them from sticking, then poured the rest of the sauce overtop. Although most cannelloni appears to be baked at that point, I saw it as an opportunity for a cheesy mozzarella top; the kind that gets the crusty corners and dark bits. So I scattered the top with cheese and baked it at 375 for about half an hour, until it was bubbly and the pasta was soft. Yum.