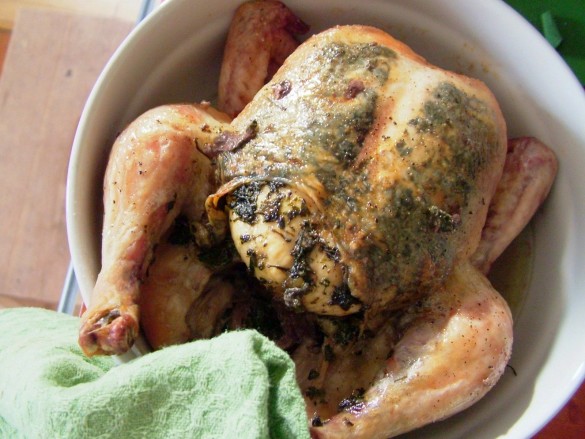 My friend Nicole Schon, owner of tnik, is a tea genius. She knows everything there is to know about tea. To be honest, I didn’t realize there was so much to know until I met her.

A few points of note: did you know that in order to get all the antioxidant benefits from your green tea you need to steep it three times? That’s right: steep, drink. Steep again, drink. Steep yet again (it’s kind of weak by now); drink. This can occur over a 24 hour period; no need to guzzle it all at once. It’s good news for those who are >ahem< frugal. Like me.

Also, if you pour boiled water over your tea and then instantly pour it off, you naturally get rid of the majority of the caffeine.

A few months ago she mentioned that she sometimes kept her used tea leaves and stuffed them under the skin of a chicken before roasting it. Brilliant! I have done this with rosemary, and thyme, and butter and garlic, so why not tea? Lubricated with a little soft butter or oil, if you like. As the chicken roasts the skin becomes more transparent, so you can see the tea leaves through it, and it subtly flavors the meat underneath as well as the juices, which may or may not end up as gravy. The only varieties I have right now are Belgian chocolate, a few chais, berry berry, creme caramel and matcha (which is powdered, so wouldn’t work), so I decided to use the rough green tea another friend brought back from Hong Kong. (Speaking of matcha: one of the reasons it’s particularly great for you is that you ingest the whole leaf, rather than straining it out as you do with other green teas. This is another advantage of using steeped green tea leaves in your chicken – you end up eating the whole leaf, so it’s a great antioxidant boost.) I steeped a pot of it while I put the chicken in its vessel, loosened the skin from the breast meat by shoving my fingers underneath, then scooped out the soggy, spent leaves and stuffed them underneath. OK, I also added a tiny bit of butter. On the outside, I patted the skin dry (to ensure a crispy crust) then slicked it with canola oil and sprinkled it with salt and pepper. Then I put it in the oven at 350 and went back to work until I could smell it roasting and the joints wiggled loosely in their sockets. W prepped some asparagus for me, deftly breaking it as he has obviously seen me do, and rubbing them all down with oil to slide onto the oven rack underneath. As it turned out, it was serendipidous that I happened on this particular day to use my green tea leaves for stuffing chicken – odd, actually, because I have roasted many chickens since hearing the idea – because when I lifted the strainer basket from the mouth of the teapot in order to more easily scoop out the leaves, having already poured myself a mug of tea, I caught a fleeting glimpse of something three-dimensional in the teapot. AAA batteries, which had clearly been stored there earlier, and now had been steeping in my green tea. Oh the perils of having a toddler in the house.