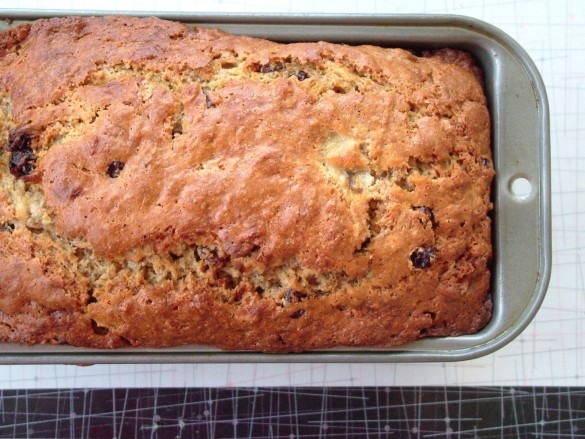 Did you ever have one of those days when you looked at the clock and it was 6 pm and you had no idea what was for dinner and were completely sick of making dinner but you have a responsibility to feed your two year old and besides that there were several hundred people waiting to hear and see what you’re going to have?

W and I had a late nap, an unusual event but I have been subbing in as traffic reporter on CBC radio all week, which gets me up at 4:30 am, so since I haven’t yet figured out how to adjust my bedtime accordingly, my schedule is a little out of whack. When we woke up, W and I peered in the fridge, poking around at the usual suspects: the rotini noodles in tomato sauce always on standby, eggs waiting to be poached and put on toast, a tub of mixed greens, some leftover cold rice and barley, still far too much Easter chocolate.

He asked for oatmeal. Why not? He loves it for breakfast. Someone somewhere at some point decided what was appropriate breakfast food and what was only suitable at dinnertime; why do pancakes, oatmeal and eggs on toast constitute breakfast, and pizza and roast chicken classify only as lunch or dinner? Ease of preparation? Digestibility? Even more of a mystery to me: who labelled Pop Tarts, donuts and danish breakfast, when other pastries are classified as dessert? I love fruit pie or crumble for breakfast with vanilla yogurt (not that it’s something I have often), and people think it’s weird. But chocolate Pop Tarts or Crispy Cremes are perfectly appropriate? Not to mention the Tim Horton’s muffins that are higher in fat and sugar than either of the two? So I cooked some oatmeal, adding a bit of the leftover whey from our cheesemaking into the water, and grating the remains of one of the apples he ate a third of and left on the couch into it as it cooked. A handful of raisins and a sprinkle of ground flax (the best plant source of omega 3s), and it was done. We both ate some, and then I popped a slice of banana bread that I froze a few weeks ago into the toaster and smeared it with peanut butter. (If you slice it before you freeze it this is easy to do, but slicing frozen quick breads is much like slicing frozen cake – much easier than slicing frozen bread or bagels.) Everyone needs a good banana bread recipe in their repertoire. If you like, add a drizzle of flax oil to the wet ingredients. To make muffins, divide the batter among 12 muffin tins that have been sprayed with nonstick spray or lined with paper liners, and bake them at 400 F for 20-25 minutes, until golden and springy to the touch.

Preheat oven to 350°F. In a large bowl, beat butter and sugar until well combined – the mixture will have the consistency of wet sand. Add banana, eggs, yogurt and vanilla and beat until well blended. Don’t worry about getting all the lumps of banana out.

Add flour, baking soda and salt and stir by hand just until combined. If you are adding nuts or other additions, throw them in before the batter is blended.

Pour batter into an 8″x4″ loaf pan that has been sprayed with nonstick spray. Bake for an hour and 10 minutes, until the top is springy to the touch. Cool in the pan on a wire rack.

To make Chocolate Swirl Banana Bread: remove 1 cup of batter and gently stir 2 tbsp. cocoa and 1/4 cup chocolate chips into it. Alternate big spoonfuls of plain and chocolate batter in the pan and gently run a knife through to create a marbled effect. Bake as directed.

Day 93: Dinner at the Highwood (and Chicken Fried Rice for M and W)

9 comments on “Day 92: A bowl of oatmeal and Banana Bread with peanut butter”