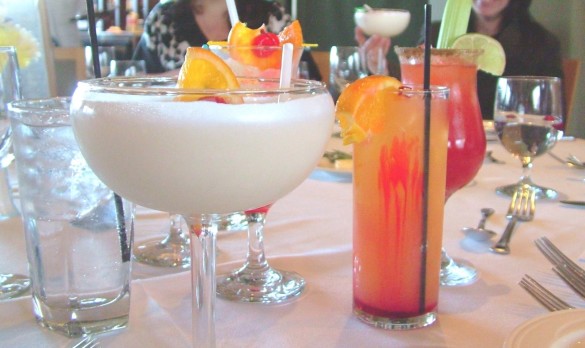 I know, it’s quite a drastic change from last night, isn’t it?

I’ve never eaten at the Highwood – the SAIT culinary program restaurant, where for $38.50 you get to choose an appetizer, soup, salad, entree and dessert, and the very capable student chefs get to practice on you. My friend D made reservations for ten and we all congregated there at 6, taking time over Singapore Slings, Chi Chis (yes, pure white ones with slices of orange wrapped around a maraschino cherry and skewered with a teeny plastic sword, served in those open fishbowl glasses you see in 70s movies with shag carpets) and gin & tonics before we got to dinner, which took until 9:30 to work our way through. Now it’s quarter to 11, and considering I have to be up at 4:30 am I should really put this post off until tomorrow and get some sleep, but that would sort of defeat the purpose of this whole project, wouldn’t it?

I had duck as an appetizer (I’m sorry, I’m too drowsy to recall the finite details, besides the truffled potato salad towerette): And pork tenderloin, fancilly wrapped in some other cured part of a pig (everything was dressed up with pea shoots): But of course I was unable to let myself off the hook when it comes to dinner duty – anytime I go out to a restaurant to eat, guilt forces me to at least feed the boys before I ditch them. Last night I put a pot of rice on to cook (knowing full well that the aforementioned guilt would set in today sometime during the late afternoon) and turned it into chicken fried rice: fried rice is best made with cold rice, and in fact near impossible to make out of fresh rice. After spending the night in the fridge, the grains are firm and separate, and far easier to fry up without becoming pasty and clumping together. This is one of the fastest and most inexpensive ways to turn scraps of leftovers into something that resembles a real meal. And all in one pan, even. This is far faster (and healthier) than Hamburger Helper: Chicken Fried Rice for the Boys (or beef, pork, shrimp, vegetable or tofu)

1) heat a skillet with a drizzle of canola and sesame oils, or either one. I use both because the sesame oil is so strong in flavor, and the canola is neutral and withstands high heat well

2) dump in as much rice as you want to cook. Stir it around until it starts to color a little, then dump in some cooked chopped roasted chicken, beef or pork; if you are doing shrimp, save them for the end so that they don’t overcook and turn tough

4) cook it all for a few minutes, then push it all aside and break an egg or two into the space in the pan; scramble with whatever cooking utensil you’re using. Don’t worry about it mixing in with the rice.

5) if you’re adding shrimp, do it now, cooking them just until they turn pink. Add soy sauce to taste. When I went to do this step I discovered that I was out of soy sauce, and  so tried to make up for the lack of flavor (how appealing is plain old rice, chicken and peas, unless you’re 2?) with a big pinch of curry powder (curry paste would have worked well too), which was delicious. (Of course I tasted it – quality control is very important.)

Day 92: A bowl of oatmeal and Banana Bread with peanut butter