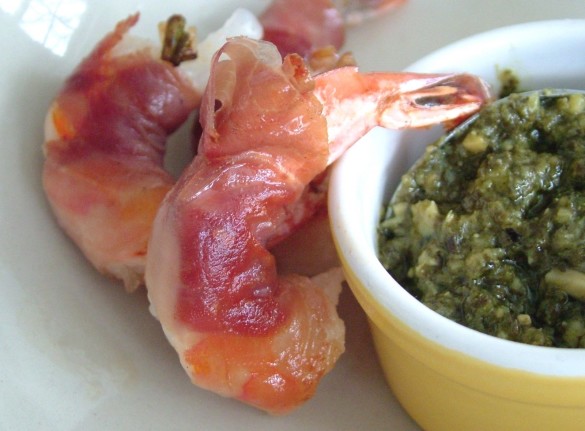 I just spent 11 hours cooking for a private event, and my legs feel like a cartoon thumb that has been whacked by a hammer. I made, in no particular order:

Lemon risotto aracini, mushroom crostini topped with Asiago cheese, panko-crusted fried ravioli, prosciutto wrapped prawns, sliced pork tenderloin wrapped around dried figs that were poached in red wine and honey (the bundles were roasted, brushed with a thick garnet reduction of the poaching wine, balsamic vinegar, rosemary and brown sugar – from my Martha Stewart Hors’ d’oeuvres Handbook), and flatbreads (I think it’s funny that there is this new high-end word for pizza) topped with caramelized onions, caramelized pears (slice them thin and saute in a little oil and butter with a drizzle of honey until they are golden), onion and chili pepper jam with various cheeses and another version made with sun dried tomato pesto, shrimp, basil and feta.

But back to the prosciutto-wrapped prawns; I’m sure I’ve mentioned these before, withough really going into detail about how to make them. This is something you should definitely be able to make.

Buy raw frozen shrimp/prawns (same thing, “prawns” just sounds fancier) around 21-30 count – this is the number on the bottom corner of the bag that refers to the number of shrimp that would make a pound. The larger the number, the smaller the shrimp. Or prawns. Get them in their shells or with just the tail on if you can, otherwise take their jackets off, leaving the tails to use as little handles. (If you keep the shells, cover them with stock and simmer for 5 minutes, you’ll have shrimp stock.)

Get about half as many thin slices of prosciutto as you have prawns, slice each slice in half lengthwise, and wrap it around each prawn, leaving the shell part of the tail exposed. No need to skewer or anything – the prosciutto is tacky enough to stick to itself. Now you can grill them or saute them in a skillet in a little oil just until they are opaque. Serve with a small dish of bottled pesto for dipping.

Oh right, dessert – chocolate espresso brownie lollipops and vanilla mascarpone panna cotta spoons: we laid out almost 200 of those Chinese soup spoons and filled them with the panna cotta mixture (really just cream, honey and gelatin, and in this case, a few spoonfuls of mascarpone, stirred in while it’s warm so that it melts), then chilled them (the advantage to doing events at the country’s largest liquor store is having a walk-in beer fridge the size of the average house) and topped them with berries. It made a perfect bite.

Although all I did today was taste and graze (starting with a yogurt I grabbed at the grocery store this morning, which, when I opened it at a red light, exploded all over me and the side window. I had no choice but to wipe it up with the spare pair of Scooby-doo underpants we keep in the glove compartment) I’m sure that calorically what I tasted my way through counted as several dinners. When I want to keep myself from sampling as I go, I chew gum in the kitchen. This is a very good idea when I’m baking cookies – it really makes you aware of how often you have a taste. And even if you spit out your gum, everything is going to taste weird for a bit, like right after brushing your teeth.

M and W had pesto chicken stew and bison chili for dinner. Freezers were the best invention ever. (Besides Spanx, of course.)

Place baguette slices on a cookie sheet and toast in the oven for about 10 minutes, until barely golden. If you like, brush each toast with olive oil before baking.

Spoon the hot mixture onto toasts and sprinkle with cheese. Return to the oven for 5 minutes, until the cheese melts. Makes about 20 crostini.

To turn this into Balsamic Mushroom Dip: stir 4 oz. light cream cheese or goat cheese and 1/2 cup light sour cream into the mushroom mixture while it’s still warm, and stir over low heat until the cheese melts. Serve warm with crackers or crostini for dipping.