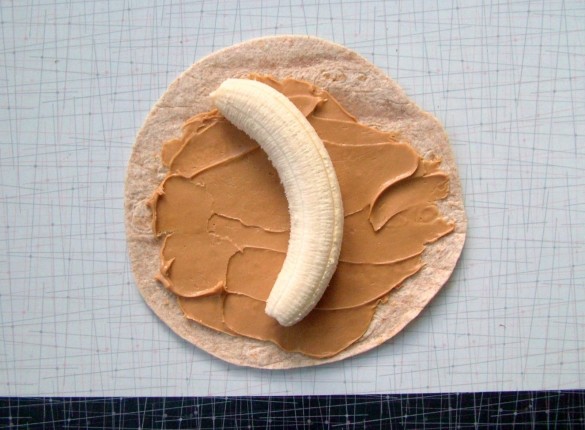 Nik and I did another 2 events today in Red Deer, then drove back to Calgary, picked up W and drove to Banff. Because someone had given her a Starbucks card that was tainting her wallet (she is a tea importer, remember) she insited on pulling over to use it. Probably a good idea; the latte was likely what kept me awake through all that driving.

The Calgary-Banff drive was from 5:45- 7:15, so technically that was dinner, along with the whole wheat tortilla I slathered with peanut butter and wrapped around a banana for W and I to share on the way out the door – my favorite mad dash meal to go. We share one for a snack or he can down the whole thing if it’s lunch or dinnertime; it’s an easy way to get protein, healthy fats and complex carbohydrates into something you can eat with one hand. (Generally I like to use just-peanut peanut butter, but W has become picky about the mouthfeel, so I gave in to Kraft light, which I personally adore… it’s not a whole lot better than the regular stuff, but slightly sweeter and less lardy-tasting. I’m starting to mix them half and half, in an attempt to wean him back onto the other stuff. Now that I think of it, a sprinkle of ground flaxseed between PB and banana would likely go undetected.) So I should have quit while I was ahead. When we got to Banff we met her boys (4, 6 and 37) at the St. James Gate for something we could actually chew, anything that wasn’t traditionally served at high tea. I didn’t think it was possible to make bad meatloaf and mashed potatoes.