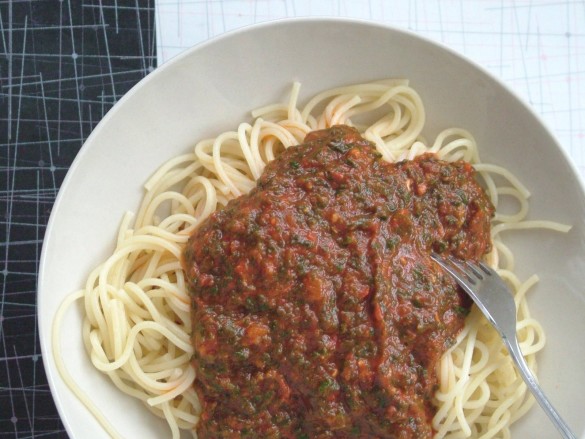 After three nights and four days of events, I got home from Banff mid-afternoon and didn’t much feel like cooking dinner. But it occurred to me that W hasn’t had anything green for a long time, and I didn’t feel like take-out or cereal, either. So I sucked it up and made a quick batch of spinach spaghetti sauce while the pasta boiled. You do this by sautéing a bunch of spinach (or half a bag of the prewashed stuff) in a little canola oil, until it wilts; pour your tomato sauce overtop (or go the other way; heat up the sauce and stir in the spinach until it wilts), pour it into the food processor and whiz until it’s smooth. Voilá – spinach that is undetectable to a two year old.

4 comments on “Day 118: Spaghetti with spinach”