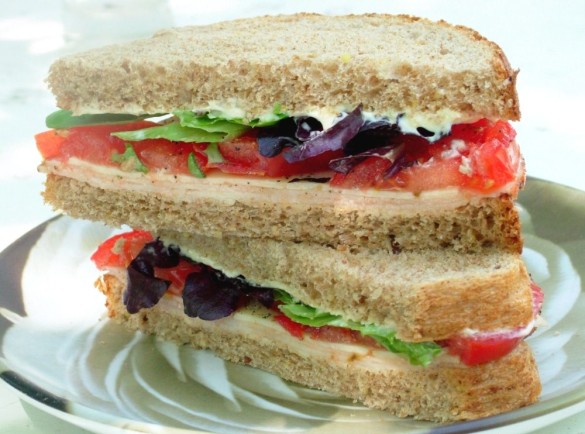 I hardly ever make sandwiches, but when I do, it’s mostly because it makes me feel like a good and competent wife feeding one to Mike, the way my Grandma made a sandwich for my Grandad every day for lunch, or at least every day that I was in their presence. She’d feed it to him at the head of the table in the windowed dining room looking out onto the Detroit river (they lived in Windsor), where occasionally a freighter would go by and we’d all scramble to get out the binoculars and smokestack guidebook to help us identify where it had come from. Sometimes he’d have it at the glass table in the kitchen, which they bought so they could see who (of my mom and her 4 brothers) was kicking whom under the table. Each time he’d say “thanks Mad” without looking up from his sandwich, and we thought it was totally hilarious that he called her “Mad” (short for Madelon).

Mostly they were tomato and/or onion or salmon sandwiches on buttered bread, which he would dip into a shallow bowl of vinegar – he said when you got to be ninety, your tastebuds needed a little help. Tonights’ were made with roasted Mediterranean chicken from the deli, with some havarti, tomatoes, lettuce, light mayo and lots of pepper; every time I have a sandwich like this, which seems too boring to bother with, I remember how much I love them, especially on grainy bread.

W asked for Raisin Bran again. (I’m glad he likes it; when I was a kid, all we would get was Raisin Bran, Cheerios, Shreddies and Muffets, and I fantasized about Cap’n Crunch and Froot Loops and Corn Pops, which we only got little boxes of when we went camping. When we were at Grandma’s though, she’d have Harvest Crunch, which was the best, even though she made us cut it with Special K. To this day it has to be Special K and Harvest Crunch.) While I have your attention, I’d like to know, please, what is going on with my rhubarb. How is it that I am completely and utterly unable to successfully grow what is essentially a weed that requires no maintenance nor a green thumb? My neighbor pulled out an unwanted rhubarb plant last year, and the thing thrived in the back alley beside the garbage bin, roots fully exposed, for an entire season. And here mine, planted nicely beside the deck in semi-sun and the protective bosom of a loving family, refuses to thrive. The stalks are pencil-thin (and pencil-long), depressed looking, and mostly green. (I’ve also killed my basil, but my peas seem to be doing very well.) Down the alley there is a plant almost as tall as me with leaves you could wear as a sarong. Up the hill, A’s rhubarb is lovely and full, thick as three-ply celery and ruby red, and you can pick more than you can carry without making the slightest dent in one plant. So long as she allows access to her rhubarb everything will be OK, but I’d still like to pick my own outside my back door.