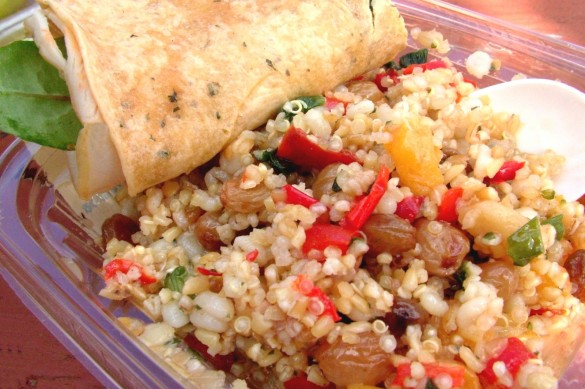 Despite the fact that we only hit McDonald’s once on this road trip and Subway once on the way out, during the final stretch home we hit Golden at around dinnertime and could not bring ourselves to get fast food again – which were of course the only options on the main drag. We had been munching on the last of the car snacks, bagels, and blueberries and apricots we had picked up at roadside stands along the way (I was very disappointed to not have come across some sort of pie stand loaded down with homemade fruit pies) all afternoon, but we needed a break and something that hadn’t been rattling around the car for two days.

So rather than choose from a sad selection of drive-thrus and gas stations, I got Mike to head into town and I went into Sobey’s. A $3 cheese focaccia passed as pizza to W, who was getting fed up with this whole driving thing (in the end he ditched it after a few bites and ate two pears and a candy necklace for dinner instead), a turkey-spinach wrap that wasn’t as good as it looked, and a small container of grainy salad that was pricey at $4.50 for about a cup, but I may try to recreate at home. Here are the ingredients: quinoa, bulgur, barley, canola oil, apricots, raisins, red pepper, apple butter, apple cider vinegar, green onions, honey, salt, lime juice, parsley and garlic. Interesting, no? I never would have thought to add apple butter to a grain salad. It was really tasty, despite having that tang that salads that have been packaged for too long tend to acquire – I was disappointed to notice as we ate it that it had come from Ontario. There is no reason for a grainy salad – or any salad for that matter – to be shipped premade from Ontario to BC! For dessert we still had beautiful fuzzy baby-bum apricots from a roadside stand, and I grabbed one of those plastic containers of precut strawberries (again, clearly not the tiny red ones from the area) and blackberries and a container of Liberté dulce de leche yogurt. Liberté is the absolute living end when it comes to yogurt – some varieties are totally extravagant at 8% butterfat (average is 1% or 2%) but makes a perfect example of it all being relative: I have friends who don’t eat it because it’s so so rich and custard-thick and high-fat, but I’d happily choose it over ice cream, which must be a minimum of 10% butterfat (and premium ice creams such as MacKays and Haagen Dazs are usually around 18%). The dolce de leche was divine, but not as mind-blowing as the mocha. I was temped to try the blackberry, which would have been great with the berries. Any kind would be a hit on fruit crumbles, crisps, pies and shortcakes. I still have to make that peach crumble – I went to the beach grocery and bought some, but they were so good we ate them as is. I haven’t had such a well-endowed, slurpy, not-a-hint-of-pulpyness peach in ages.

(Note: dulce de leche is a thick Spanish milk caramel – you can make it by sumberging an unopened can of sweetened condensed milk in a pot of water, bringing it to a simmer and cooking for 2 hours – replenish the water as needed to keep the can covered. Let it cool in the water and when you open it it will be a deep golden milky caramel.)