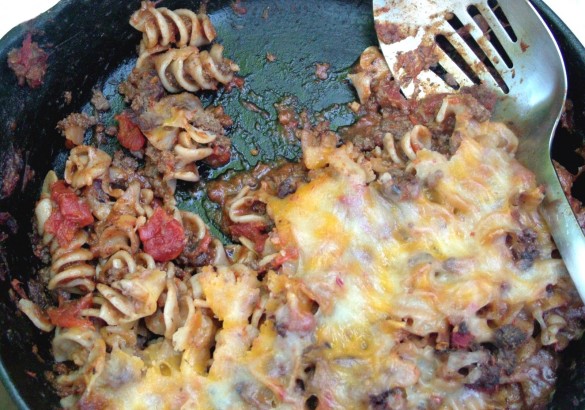 I realize there was nothing about today that called for baked pasta. It was 30 degrees outside by 10 am, and is still so hot I have to intermittently go outside and stand in W’s kiddie pool to cool off. But yesterday when an avalanche from the freezer almost crushed Lou it became apparent that we needed to free up some space. Even our ice cube trays were displaced, and today ice could have come in handy. So the first thing that I took out (or rather kind of fell out) was a ziplock baggie of bison and blueberries that I had cooked up before we went away. I thawed it, stirred in the last of the canned diced tomatoes from Vij’s curry, some tomato sauce sauce and boiled some whole wheat rotini. The usual Willem Chow. But then it got cold and he didn’t eat it, and I had gone and made way too much, so I left it all in the skillet, sprinkled it with some cheese and baked it just long enough to rewarm the innards and melt the cheese. I had to turn it on to bake a Key lime pie for tomorrow morning anyway, so at least we got dinner out of it.