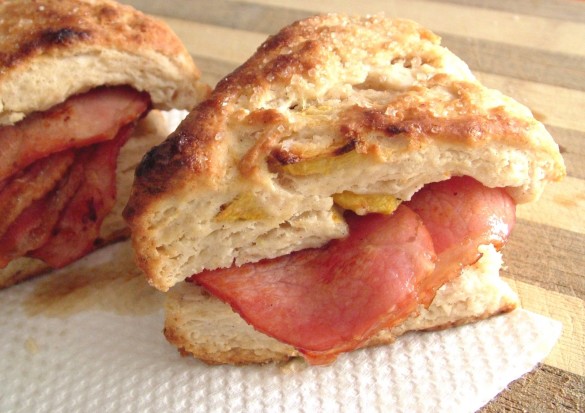 As much as I love writing this blog, it sometimes feels as if I have homework every night for a year. Tonight, the dog actually ate my homework.

Back bacon on a peach biscuit seems as unlikely a dinner as any I can think of, but it was actually quite a tasty handful.

It all came about as a result of my being a bad sister/friend. Yesterday I made plans for a swim/playdate with my sister and K, and got caught up at work for 6 hours instead of the 1 1/2 I had planned on. (I keep asking for time management skills for Christmas, but so far Santa hasn’t delivered.) Before leaving the house I made a batch of biscuits with brown sugar and peaches to bring for our lunch, which instead sat on the kitchen counter all day. Biscuits just don’t keep well, even in the freezer, so I threw them in the freezer and swore it would only be for a day or two – as you know, I hate wasting food, so I tried to think of some use for them besides warming them and slathering them with butter or turning them into peach shortcakes. (I had just finished the Plum Browned Butter Bliss. Speaking of – I made a Peach Browned Butter Bliss to bring to the studio this afternoon, and as you can imagine it was quite well received. If you really want to make an impact, bake it at work. Make sure you toss the peaches with a little cinnamon, and you will distract the entire newsroom with the absolute best kind of baking smell. And get this: a full-sized, deep-dish pie plate fit in the toaster oven. D came over from her desk and stared at it as it baked its Bliss on a filing cabinet, and said to it, “why do I even own an oven?” Which is true, really – if you can bake things like pie in the toaster oven, why heat up an oven-sized one?)

So what could I make for dinner that would incorporate a peach biscuit? Pulled pork! Peaches go with pork. Biscuits go with pork. It made sense considering I was taking over traffic duties on the Homestretch today, which would keep me at work right until 6, and you can do pulled pork in a slow-cooker. I dug miscellaneous bits of pork shoulder and pork tenderloin out of the depths of the freezer, thawed them in a bowl of hot water, browned them in a skillet, then a sliced onion, and deglazed (read: got all the yummy bits off the bottom of the pan) with half a can of root beer. (If you ever have a half a can of flat root beer or Coke, this is a good use for it. Not exactly healthy, but hey, you were drinking pop anyway, weren’t you? Apple juice works too, but isn’t really that much better – it has the same amount of sugar even if they do add vitamin C back into it.) Then I dumped it all back together and set it to cook all afternoon before I left. Browning everything first creates flavour, which makes a difference even when you’re cooking something in the slow cooker.

When I came home I pulled the pork with two forks and popped the frozen biscuits in the toaster oven (the plan was to add some barbecue sauce to the pork – pulled pork is essentially shredded pig candy), and went upstairs to read/reenact Mortimer, Be Quiet! with W; we were halfway through when a large and familiar crash came from downstairs. This is one downfall of having a 6 month old puppy who can stand up and almost rest his paws on your shoulders (I’m 6ft tall if I stand up straight, which isn’t very often) – besides costing a fortune to feed and being starving all the time he can also easily access bowls and skillets that are precariously close to the edge of the counter; he has downed two half pounds of butter in the past week as well. And I suspect the butter presently in the dish has a licked crevasse out of it, not spread-marks from a knife… 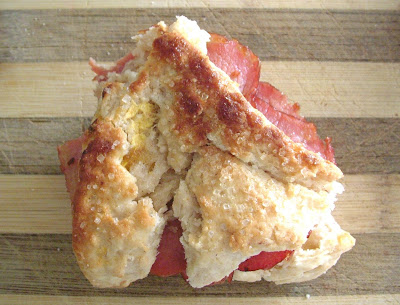 You can imagine how this story ends. Plenty of expletives and instead of pulled pork I unceremoniously pulled out a small package of back bacon, frizzled it up in a skillet and we ate it stacked onto plain biscuits, wrapped in a paper towel, on the back porch. W thumbed peas from their pods and intermittently threw them into/at our mouths. Back bacon is another ingredient I rarely have in the house but recently bought because it’s so much leaner than regular bacon (the puddle on the paper towel in the photo up top is juice, not grease): 100 grams of back bacon contains 100 calories, a little less than ham. (As a point of reference, when I had a job at a sandwich shop – no, not a sandwich artist job – each sandwich contained 60 g of meat.)