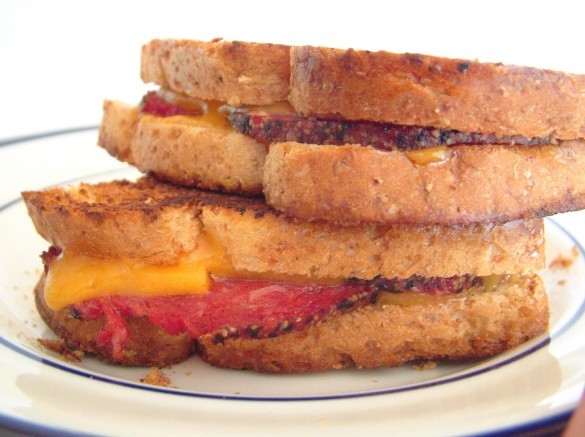 When I turned on the news at 5:15 one station said it was 34 degrees, and another reported 37. Either way, too bloody hot to even go into the kitchen.

Except that I had to, to retrieve the roasted peach ice cream.

We all sat limply on the couch and passed the container around until it was gone. Then I sawed off a few slices of elk pepper salami that I’m bringing in to CBC tomorrow morning, just to try it (from Canadian Rocky Mountain Ranch, one of the participants in the Flavours of the Foothills Harvest Festival this weekend – it was wonderful; moist and meaty, not at all gamey and relatively lean, as far as salamis go), and some old cheddar. Then I chopped up some of my pickled beets and a tart apple, and sprinkled them with some chopped toasted pecans. (I had read this in the current issue of Homemakers’, but was supposed to use walnuts and oil and lemon juice. It was just fine as is.) 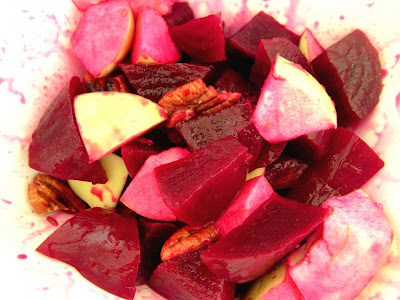 And in fact I got to try out my new discovery: I read somewhere, and this makes complete sense, that when you finish your pickles you can reuse your brine to make more pickles. So when I finished off the jar, I sliced a few leftover roasted beets from the fridge back into it, and they were again covered with brine. Instant replenishment of my picked beet stash. 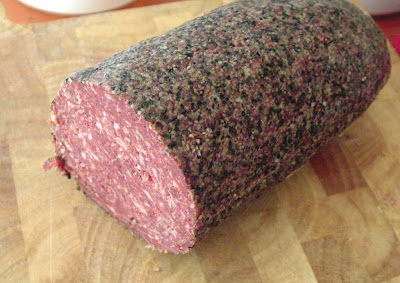 I love pepper salami. I used to take two slices and put a thin slice of old cheddar between them, then zap them in the microwave for a few seconds to melt the cheese and turn the salami all crispy – it was heaven. And did you know that you can make salami chips by baking them in a single layer on a cookie sheet for 10 minutes? Salami chips! Remembering that, it occurred to me that salami would make the best addition to a grilled cheese sandwich. 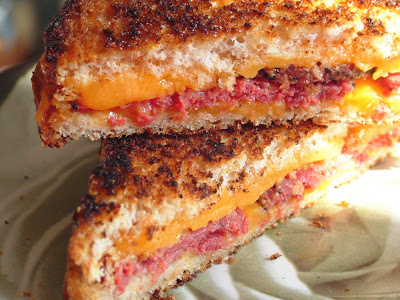 So of course we had to try it. I was right. I love finely minced purple onion or plum tomatoes in a grilled cheese, but this, I mean wow. The high quality, thickly sliced elk salami might have had something to do with it, but of course any kind of salami would do the trick. I haven’t been baking bread lately, or buying it (in an attempt to not eat it so much), so plain old whole wheat sandwich bread was the carrier; instead of spreading each side with butter, I put a tad in my skillet with a drizzle of canola oil and browned them, which made them every bit as crispy (and perhaps more so), with less saturated fat and more of the healthy stuff.