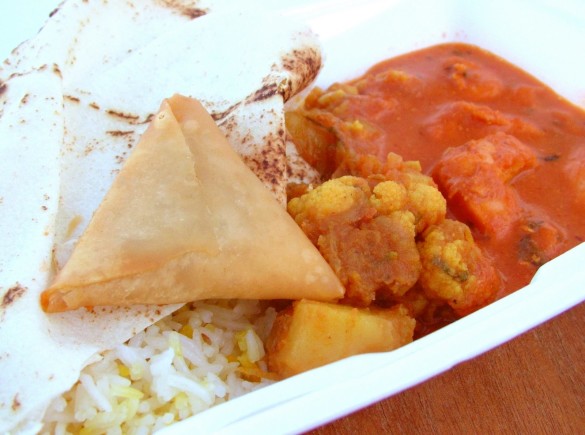 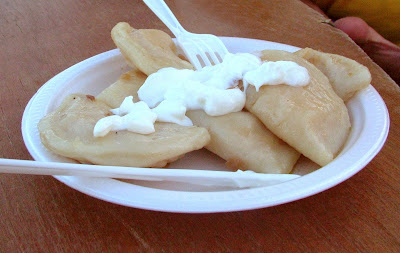 We completed our mission to eat our way around the world tonight. Or at least made it to India and the Ukraine.

Both were just alright. The samosas were about the size of a postage stamp. (OK, two postage stamps.) The aloo gobi (curried cauliflower and potatoes) was the best part, I think. I asked for the recipe, but was not obliged. I did find one from Chef at Home that looks worth a try. The naan was not naan, but a piece of pita. Boo.

Whenever peroghies are an option, it’s an option we take. They were good, but I’m always a little disappointed when they aren’t browned in a skillet and served with caramelized onions. It did remind me that I really should make a batch of peroghies again; I haven’t for probably 10 years. It was about a decade ago that I insisted Mike’s mom dig up some sort of family recipe – what good is marrying into a Ukranian family if they aren’t going to provide you with some deadly secret grandma-recipe for peroghies and cabbage rolls? She didn’t deliver on the cabbage rolls (probably a good thing – his dad’s cabbage rolls were nasty when he bothered to make them) but I did get a peroghy recipe. It might not be the best recipe, but it has family history, dammit.

(I had never met Mike’s Ukranian grandma, a woman who birthed 14 kids in a 3 bedroom house smaller than ours in Cudworth, Saskatchewan. I heard stories of her feeding Mike gravy at 2 weeks old, which explains a lot, and in the glaring photo on Mike’s mom’s bookshelf it’s difficult to distinguish between her and her husband; both scowling at the camera, with eyebrows growing straight up into their hairlines to accentuate their expressions.)