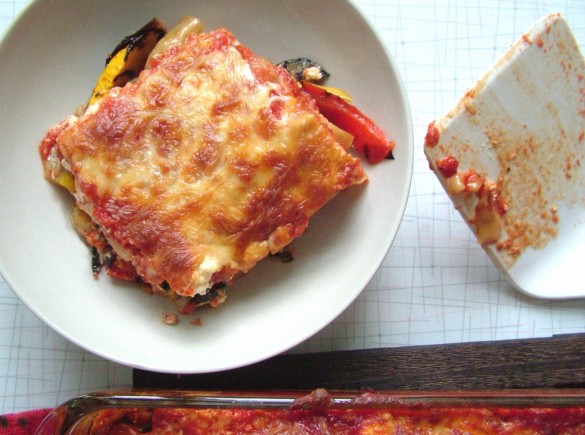 Grilling vegetables isn’t hard. Slicing them evenly lengthwise sometimes can be though, and brushing them with oil and flipping them on the grill, jockeying for position over the hot and cool spots, can be tedious. The resulting lasagna was fantastic, but I think next time I’ll chop all the veg up and roast them in the oven. The slices did make for pretty layers though.

I don’t use a recipe to make lasagna, so I’ll walk you through it: 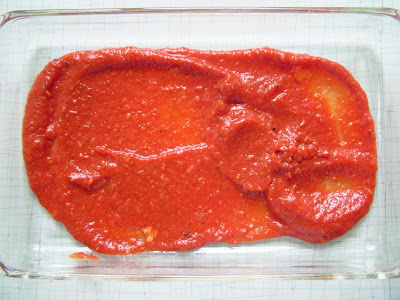 1) Spread some sauce on the bottom of the pan. It doesn’t have to be a traditionally shaped pan – I often make lasagna for 2 (now 3) in an 8″x4″ loaf pan. Just break the noodles to fit. Whatever pan you use, make sure you have lots of sauce. Top with 3 noodles. (Oops, I forgot a picture of the noodles! You know what noodles look like. Use the no-cook ones because it is a royal pain to boil lasagna noodles. Hint: even the ones that aren’t labeled “no-cook” work without cooking them.) 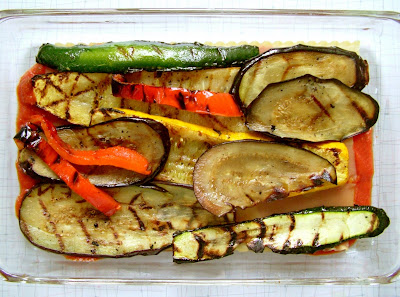 2) Slice some eggplant (1 medium), zucchini (I used 1 green, 1 yellow) and a red pepper (quartered), brush with oil and grill until softish and grill-marked. Set them aside and slice the grilled chunks of pepper into strips. Lay half of them on the noodles. Their moisture will help the noodles cook through. 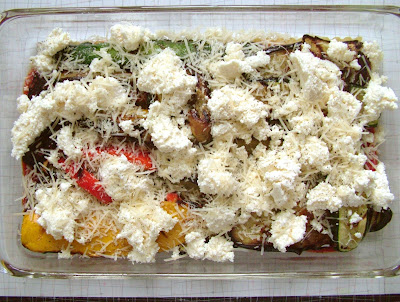 3) Drop some part-skim ricotta in spoonfuls over the veg. (I used almost a whole 500 mL container altogether.) I have decided to skip the traditional stir-with-an-egg step, which seems to me like a waste of a bowl and an egg; after all, there isn’t much reason for the cheese to be bound together, is there? Sprinkle with some grated Parmesan, if you want. 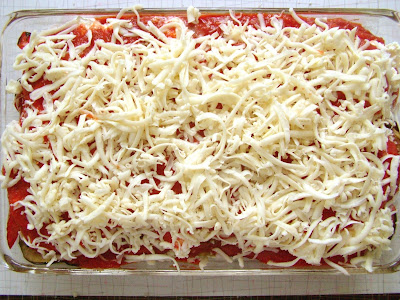 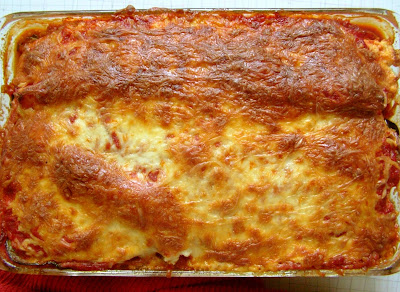 5) Bake at 350F for about an hour, until bubbly and golden and a fork poked through tells you that the noodles are tender. Cover with foil if you need to if it’s darkening too quickly. (In fact, you could start out with it covered for half an hour – this also helps keep the moisture in so that the noodles cook through. Uncover for the second half though, to allow it to turn golden.) Let it sit for about 15 minutes before you cut into it.

W has started asking me to take pictures of his food, and tonight he took the camera and wanted to take a photo of his own dinner. Since I was slow to get the lasagna in the oven, it was still baking at 6:30 and so I made him some whole wheat rotini with tomato sauce instead, and he asked to take it under the table to eat with the dog. At least he used a fork. 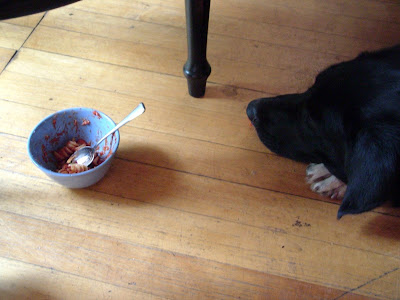 (This is one of his photos.)