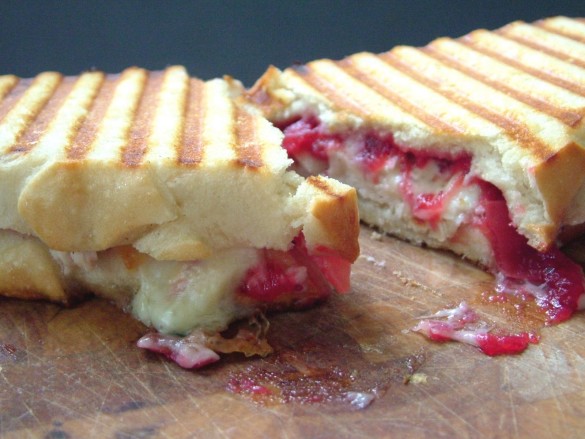 Thanksgiving has come early to the Van R house, thanks to a day of shooting Thanksgiving segments for Living Calgary (CBC TV), during which we shot an extreme makeover, turkey edition that included bang bang turkey and this panini. There was enough left over leftovers to make more when I got home, and I was spurred on by the novelty of having my panini grill back (my sister had borrowed it to make chocolate panini for a staff meeting at work. Yes, chocolate panini. Another day. Maybe tomorrow?)

A panini is just a fancy name for a grilled sandwich, pressed down as it cooks (on both sides simultaneously) in a panini grill; if you don’t have a grill, just cook them in a skillet with another skillet (or pot, or anything heavy) set on top of it to weigh it down. These sandwiches were made with crusty bread brushed with garlicky canola oil (crush a clove of garlic into a small ramekin of oil; brush on the bread) enveloping shredded leftover turkey (OK, it was a Safeway roasted chicken. But it was for TV; who can tell?), chunky cranberry sauce and a couple slices of brie to glue it all together. The crispy bits of brie that squished out the ends were my idea of perfection. (Sorry, I believe I had already picked them off and eaten them before taking the above photo.) Cheesy, crispy bits. I would have named W Crispy Bits if I didn’t think it would come with a lifetime of torment. Who doesn’t love crispy bits? I think I may be getting punchy from lack of sleep and wine milkshakes. (All the alchohol doesn’t cook off, you know.)

Yes – red wine milkshakes! I met my friend Dana (one of my friends Dana) 7 years ago as food stylist for her Calgary book tour. The morning we met I had spontaneously lost my voice. Like completely. And I had to take her around to all these media outlets and set up for her shows and everything, and she was incredibly good about it when I could barely force out a squeak. (In more recent years, a chocolate-pistachio Yule log I made for her got left – by me – on the front step between TV shows and eaten by squirrels. You should have seen the teeny chocolate foot prints all over the plate and steps. Their little rodent eyes must have popped out of their heads when they came around the corner to a giant chocolate log liberally sprinkled with pistachios and little chocolate mushrooms. I successfully recreated it for the noon news, but none of the crew were allowed to eat it afterward due to squirrel lick.)

Anyway, at our first meeting she made Pepto-Bismol pink milkshakes out of vanilla ice cream and red wine that had been reduced down to a syrup with sugar, orange juice and mulling spices, and I thought she was bloody brilliant. I still do.

You will win a lot of friends with this red wine milkshake. (Do warn them first that it’s not strawberry.) With its festive flavours, it’s a good alternative to eggnog, too. 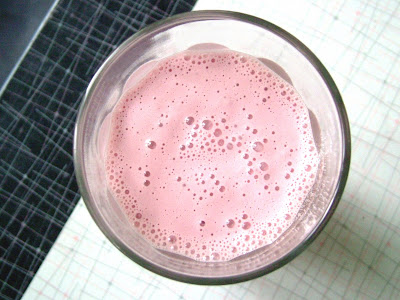