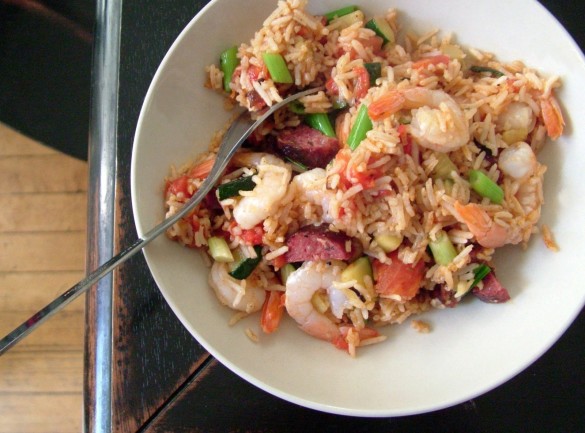 I love it when things you have little hope for come together like a perfect wee origami swan you didn’t even intend to make but all your fiddling somehow produced it and it looks to all the world as if you meant to do it all along.

I made a pot of rice this morning to bring to CBC and didn’t, and so thought I might as well just go ahead and turn it into fried rice, which always makes Mike happy and is after all best made with cold rice anyway (the grains are more separate). I rooted through the fridge and found yet more bludgeoned zucchini, two limp green onions and a small leftover bison smokie, and was already apologizing to you all in my head as I sauteed up the zucchini and rice in a hot skillet, thinking this is going to be the weirdest fried-rice combo ever, but who cares, it’s edible and I’m sick of making dinner. I was about to add my usual drizzle of sesame oil and soy sauce and crack in an egg when the sausage-rice combo triggered a memory of jambalaya. So I grabbed a small handful of diced peppers from my ziploc freezer stash and threw them in with a pinch of thyme, and had half a can of diced tomatoes in the fridge that went in too, which brought the rice to a perfect jambalaya-esque consistency. I ran another handful of frozen shrimp under the tap to thaw them out, then tossed them in at the very end with a shot of hot sauce and the chopped green onions. Mike thought I was a superhero, possibly due to my impossible speed or ingenious creation of something out of practically nothing. (It can’t have been the tights – I haven’t worn them since the 80s. Although I haven’t yet managed to throw them out.)

And I thought there was nothing in the house for dinner. (I think the jambalaya is going to my head.)