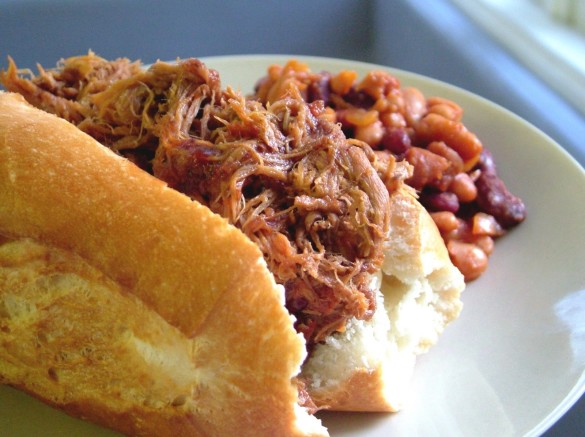 If you didn’t get an email asking for your coordinates so I could ship you a spanking new Crock Pot this morning, sorry about that. I so wish I could have sent one to each of you, but I doubt the fairy godmother/FedEx guy will show up on my doorstep with 200+ new Crock Pots. That was so much fun though – it makes me want to give stuff away all the time – perhaps I will start Free Stuff Fridays (far better than Casual Fridays or Freaky Fridays, don’t you think?) so stay tuned. I’ll try to scare up some more loot.

In the spirit of the contest, and because I just got home last night from foodstyling for said Crock Pot media tour in Edmonton, I decided it was a slow cooker night. (That, and I had to do CBC traffic this afternoon until 6pm.) Besides, when I got home and unloaded all my gear and had Crock Pots all over my counter and scraps of ingredients including a pork roast left over from various TV shows, it made sense to throw it into a C-pot rather than put it away, and let it go overnight. Korey came up with a brilliant recipe combo – pulled pork – which I must say is about as simple but yet better than any pulled pork recipe I’ve made before – and then a Southwestern soup made with leftover pork and the rich pork stock that comes from it. And while you eat your pulled pork the poured-off stock chills in the fridge for a day, allowing all the fat to harden on the surface for you to scoop off. It really is quite brilliant.

Plus, I have to do traffic again tomorrow. AND make a turkey dinner for the Eyeopener crew tomorrow morning (or tonight, if you consider that the turkey has to go in at around 1 am), so I’m fairly confident I will be in no state to come up with dinner tomorrow night if something isn’t already in the works.

Since the pork was done overnight, at 7am I pulled it out, poured off the stock, and threw three cans of beans into the pot without even needing to wash it out. Large cans of red kidney, white kidney and navy beans went in with a chopped onion and about a cup of barbecue sauce, a glug of Worcestershire and squirt of grainy mustard. That simmered for most of the day, and when I got home and had 10 minutes to assemble dinner before A came over to prep the turpigen (tune in to the Eyeopener tomorrow morning for an explanation), it came together in under 5. I wish I could have made a pan of cornbread, or a cheesy beer loaf to act as pedestal for the pulled pork (which is easy to reheat in the microwave or on the stovetop), but I had to settle for a store-bought chewy-crusty bun, which wasn’t half bad.