That’s right, we had popcorn for dinner. Generally when I get home after a long trip I want to settle right into the kitchen and cook something; tonight I did not. We got home just after 1am and were locked out; after much pounding on doors and windows and ringing of the doorbell and checking all access points (I’m amazed Lou didn’t just drop dead from excitement and frustration at not being able to open the door himself) we headed over to my parents’ house to sleep, at which point Mike called to say he was just next door at a particularly fun party (and I missed the steaks topped with grilled Portobello mushrooms and skewers of shrimp, to say nothing of the birthday cake). So we drove back, and W woke up with all the excitement, and it was closing in on 3 before we actually made it to bed.

So does that let me off the hook? We fancied the popcorn up a bit – I’ll tell you about it. But first, let me bring you up to speed on my weekend in Kelowna.

After our 11am checkout on Saturday, I had 5+ hours to pass with W while my Mom and Dad golfed. Cherylsuggested taking a short jaunt over to Peachland and pay a visit to Bliss Bakery, then walk across the street to throw rocks into the lake, which seemed like pretty great advice. W fell asleep en route, so when I got to Peachland (about 15 minutes from downtown Kelowna – I had no idea one was practically a suburb of the other) I pulled over under a willow tree beside the lake and sunk myself into Molly’s book (A Homemade Life, which is garnering many well-deserved oohs and aahs throughout the foodblogosphere) and ate a leftover half of a grilled chicken and avocado club sandwich which had spent the night in the mini bar. I had carried this book around Tofino for a week but barely cracked it open… now Molly made me hungry for banana bread with chunked chocolate and crystallized ginger, intriguing salads, slow roasted tomatoes, and little tuna frittatas baked in muffin tins. Oh and a trip to Paris, please.

Soon enough W woke up, and we went to the playground, and checked out enormous spider webs on the docks, and threw many, many rocks into the lake. Then we went to Bliss, where it became evident that W has fallen heir to my whipped cream radar. 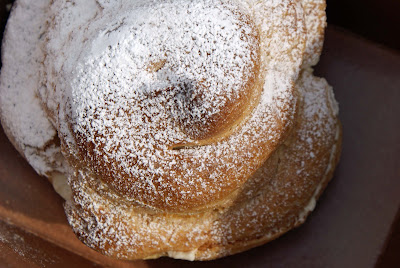 He zeroed in on a mountainous cream puff filled with strawberries and cream, doused in snowy sugar. This would have been my pick too as a kid – easily the biggest thing in the display case, but disappointingly devoid of chocolate – Long John was my first love, and still I’m immediately drawn to anything of that ilk by default, even if when I stop to think about it, I’d really rather have a scone or lemon bar. To be truthful, I did really want the chocolate-caramel bread pudding, which I had seen out on the patio topped with an equally impressive quantity of whipped cream (always a selling point for me, in case you couldn’t tell), but they were assembled in actual bowls, and I promised W we’d bring our booty straight back to the park. 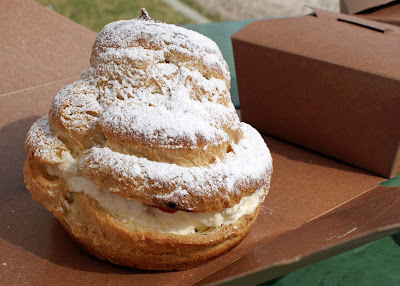 So the giant strawberry cream puff came with us. It was, like a few men I’ve known, very, very beautiful, and a bad idea. For one, it was about as messy as it could have been; we came at it with forks to no avail, and had to tear it into chunks to eat it, as it was clearly too large to attempt to get your mouth around. It had an odd saltiness and low berry-to-cream ratio. W didn’t like it, but was unfazed; I ate more than half before throwing the rest out to stop myself from finishing it. The cream puff itself was quite splendid, but afterward I wanted to jump up and a) throw up, or b) run a few laps around the lake, neither of which were practical at the time.

Of course, since I was there, I picked up a few things for our drive home Saturday night: a pecan sticky bun, cakey and heavy on the cinnamon but not so much the sticky (we fought over the pecans in the car driving through Sicamous), 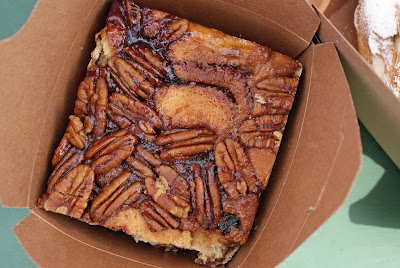 a granola-y cookie (I believe these are a prerequisite if you own a bakery or coffee shop in BC), 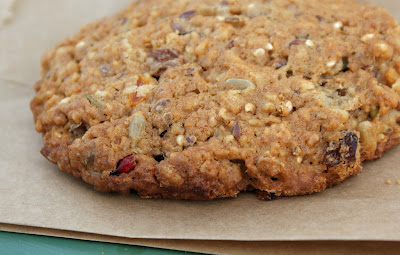 a wedge of bison-yam quiche and a braided rosemary loaf topped with coarse sea salt, which we used as a vehicle for poached eggs this morning, and later toasted to spread with plum jam. All was scrumptious. Bliss will definitely stay on our summer driving trip itineraries.

So today, when dinnertime snuck up, none of us felt much like eating. W was deliriously, manically tired, and asked only for popcorn in his favourite red and white striped popcorn bowl and to watch the Grinch. (The Chuck Jones one, not the Jim Carrey one.) I made him a bowl, and then tossed another with some olive oil, grated Parmesan and lots of ground black pepper. To be honest, it’s tricky to get seasonings to stick by drizzling oil without using too much, so I did the spray canola thing – if you have a pump you fill yourself, or a spray variety that’s just canola or olive oil, you can kind of spray it, and sprinkle, and toss it about, and the cheese will more evenly stick. Instead of the pepper, chili powder, curry powder or Italian seasoning would be tasty with the Parm.

Thanks, by the way, for not calling me on skipping right through Free Stuff Friday. I did remember during the day as we drove from Vancouver to Kelowna (I got panicky as the shadows began to get long that I had not touched a computer yet that day), just not at the appropriate moment, when late on Friday night was frantically trying to post something on my Mom’s laptop (did I tell you mine came crashing out of the back of the car upon our arrival in Tofino? It did) before the defunct battery died, with a wavering connection, W wrapped around my side, my Dad trying to sleep in the next bed, my Mom in the tub and the power cord buried somewhere in the depths of the car out in the parking lot.

I’ll come up with an especially fun toy this Friday, and I won’t forget, promise.

One Year Ago: Spinach Meatballs

12 comments on “Peppered Popcorn with Parmesan”