We ate a progressive dinner of sorts this afternoon/evening – you know where you start with an appetizer at one location, move on to dinner at the next, and dessert at a third? This afternoon was a refresher course for barbecue judges who are doing Barbecue on the Bow this year (that’s us) so we headed over to the Queen of Smoke (Sharma Christie)’s house for a bit of a brush up, and two briskets were smoked for the occasion – you know, so we had some smoke rings to ogle over and meat to make an example of. First course: brisket, saltines and bottled water. 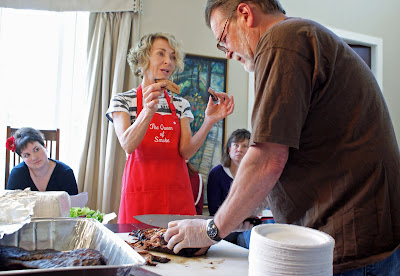 Mike’s mom and sister teamed up to watch W while we were there, so the switch off was staying for dinner when we arrived back at the end of the afternoon. Chopped salad (iceberg lettuce, peppers, tomatoes, cauliflower, broccoli, green onions, Catalina dressing – do you remember that stuff? – very 1980s steak house, right down to the shallow plastic bowls) and frozen pizza. Dinner #3 was at my Mom’s. We didn’t plan to eat, but she ordered in east Indian food for the occasion of my cousin being in town from Windsor – my childhood Bobbsey twin, and I haven’t seen him in eons – and so we arrived just as the food was being set out. Once everyone had filled their plates there were takeout containers left with enough butter chicken sauce to swim in, and half a basket of naan. I’m just not that strong a person. I cleaned it all up, plus most of the bowl of chocolate covered almonds.

So that was dinner. And now I shudder to open this door again, but it must be opened, because I shudder even harder every time I see my header in a state of purgatory – with some of you loving and some hating it, but none really loving the catchphrase, which I’m not even really sure I need but I do see as an opportunity to inject a little humour. On the other hand, I don’t want to have one just for the sake of having one – I may lose it altogether. Or, how about: eat my words? I know, I know. Everything is so cliché in the food world.

In other news, I’ll be on Martha Stewart Living Radio tomorrow morning – 12:15 EST. Care to wager how much I’ll sleep tonight? I feel like I might just lose my brisket.

One Year Ago: Fig & Olive Tapenade

Prime Rib (on the barbecue) and Hasselhoff Potatoes