… and Beet and Purple Cabbage Slaw, Lentil & Barley Salad, Maple Squash Puree, Grilled Vegetables, Chocolate Chip Cookies and Mini Pavlova with Lemon Curd and Blackberries. That was last night, but we subsisted on leftovers today, in between a dozen or so dishwasher loads.

Yesterday most of the ‘hood came over after our 6 hour community clean-up and the opening of a new park in Inglewood. By the time it was dinnertime we had all had too little sleep and too much sun, and the prime rib roast (left over from BT last week – yes, I froze it) had just gone onto the barbecue. (Remember my complete lack of time management skills?) The vat of sangria that arrived first did not help facilitate the dinner-making process, nor did prioritizing the simple syrup we needed to make mojitos with. (I know, you can use plain old sugar. We just wanted to be fancy about our mojito bar. Or more appropriately, the stickiest corner of the counter.) I thought I was being minimalist and was totally prepared. I was, as usual, totally not.

It’s funny – people are always telling me they couldn’t possibly invite us over because it’s “too intimidating” (or some such) to have to cook for me (which is silly, right?), or apologizing for whatever food they are serving, which is always spectacular. On the other hand I always get stressed out when people come over not because of the dust hippopotami on the stairs, but because they have such grandiose expectations of what they are going to be fed. It’s tough to live up to sometimes. OK, most of the time. So when in doubt, I deep fry stuff. Like corn dogs and mini donuts or churros. Or throw a prime rib on the grill and hope for the best. It’s a shame, though, that a mutual love for food should spur anxiety over sharing it.

I never would have trusted myself to do a $40 cut of meat on the grill had I not just done it with Ron last week. And really, it’s easy. Just make sure you have a meat thermometer – preferably a digital one. What he does, after painting it with mustard and salting and peppering it and pressing rosemary all over it (you could do any type of rub here) is crank the barbecue up to high, and when it’s good and hot (the dial will register around 600 degrees) throw it on, sear it on all sides, then turn off one side – the side the meat is on – and leave the other one high. Throw some wood chips in – he used chunks of wine barrel – and close the lid. MY mistake was to keep on opening it to throw hot dogs and burgers on for the kids – and of course because the meat was nowhere near done, all the grown ups had to eat them too – which slowed the cooking time quite a bit. It should have taken 1 1/2-2 hours for a 5 lb roast, but after 2 my dial meat thermometer wasn’t registering anything. J ran across the street and brought over two backups. The poor piece of cow had three probes in it, none of them registering at all. So either all three simultaneously broke, or the meat wasn’t even up to the lowest temp on the dial. (I do have a digital thermometer but couldn’t find the wire-probe part, which Woody and Buzz are likely using to fight dinosaurs under W’s bed, or I’ll find it in my garden ten years from now.) Finally after 2 1/2 hours and a handful of us standing around the barbecue poking at it for quite some time, we decided to take it off, wrap it in foil and let it rest for a half hour or so. (What should have happened was my digital thermometer would have let us know when the meat was 125F, then we would have pulled it off, wrapped it in a few layers of foil, and let it rest until it went up to around 142F, at which point it would have been perfectly and evenly cooked and wonderful. 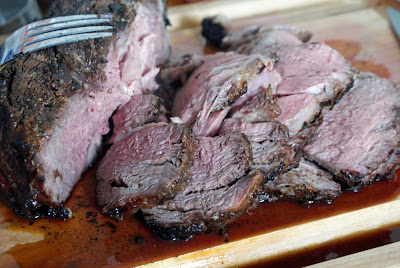 It was fine. Not perfection, but not heinously overdone. But after 20 minutes of resting (and 4 hours of beer-drinking) all the guys decided to walk over to check out the new house B is rebuilding, and the second those of us left at home gave up waiting, unwrapped the thing and started slicing (by now it’s around 9 pm) W woke up (having stripped naked and climbed into bed about an hour after his back yard was taken over) and came halfway down the stairs, naked and crying, with a very high fever. So I left everyone to the meat and extras (which most people missed, having gone home with their toddlers) and went up to lie with W and mop his forehead and back with a cool washcloth.

Let me just tell you about the potatoes. They’re really called Hasselback potatoes, named for Hasselbacken, the Stockholm restaurant where they were first served, but I can’t not call them Hasselhoff potatoes. How could I? Hasselhoff is far more entertaining. Especially when he’s naked with a pair of shar pei puppies covering his bits.

You really don’t need a recipe for Hasselhoff potatoes. Choose thin-skinned potatoes like Yukon gold, scrub them, and slice them thinly (try for 1/4 inch), cutting not quite all the way through. At this point you could slide any number of ingredients in between the slices – thinly sliced garlic is what I did, but you could tuck in whole sage leaves or bits of prosciutto or parma ham. Set the potato on a piece of tin foil, drizzle it with canola or olive oil, dab with a bit of butter if you like, and sprinkle with salt and pepper. Wrap it up and throw it on the grill. Depending on the heat they should take about an hour; turn them once in awhile. And if your grill is full, you can throw them on the upper shelf, where they will get the heat when it’s closed, creating an oven environment. That’s it. Do as many as you want, obviously.

J convinced me as the last stragglers headed outside to the patio to take a photo of the kitchen, post-party, to post here. A picture really is worth a thousand words. 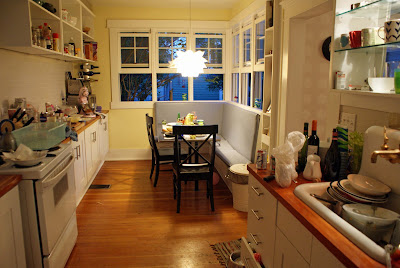 One Year Ago: Leftover Spaghetti Pie and (low fat) Lemon Bars (and an introduction to brand-new Lou!)

20 comments on “Prime Rib (on the barbecue) and Hasselhoff Potatoes”