This morning, something came along completely out of the blue that crept up and whacked us behind the knees, shaking us all down to our foundations. It was one of those things you can’t imagine could just show up without warning while you’re sitting blithely at the dentist and everyone is going about their morning routines. But it does, and it totally trumps everything you had previously scheduled, even what was considered the important stuff.

And I can’t really share it here because it’s not my news to share with the world, and even though it affects us terribly I can’t really comment on much regarding our day, particularly the dinner situation, without giving it away. So I’ll just say that although everyone is (relatively) OK, we spent most of the day at the hospital and didn’t get home until close to 10.

Because hospital food is questionable at best, I ran home mid-afternoon and made a batch of brown and wild rice salad with dried fruit, parsley and pecans to bring back, along with some leftover roasted chicken. The two will likely be picked at over the weekend, here and there between home and hospital. We have a few barbecues to attend as well, so luckily we’ll be fed.

And when W and I got home (Mike is at Sled Island, not in hospital) I needed some form of warm carbohydrates, and so put a pot of water on to boil and rummaged through the freezer for a baggie of the peroghies Cheryl and I assembled awhile ago to boil up, then brown quickly in butter and eat by myself in bed with a book. (Or more likely, in front of my computer.) I didn’t look at the label because I didn’t much care which kind I got, but ended up with some stuffed with pear and ricotta – a combo I had forgotten she was inspired to make after I left. And yum. It’s a good thing I didn’t bother with the bacon. (Although come to think of it, bacon, pear and ricotta would be rather delicious.)

It was a welcome distraction from the events of the day, and made me ponder other sweet peroghy possibilities; strawberry-rhubarb, blueberry-maple-ricotta, roasted peach. Any would be fantastic crisped and browned in a buttery skillet and immediately laid over a scoop of vanilla ice cream, or topped with crème fraîche. (If I had to guess, I’d say these pears were finely chopped and sauteed in butter with a bit of sugar and cinnamon, then stirred into ricotta and used as a filling.) 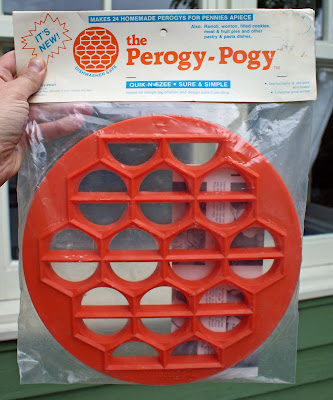 Mostly what made me think of peroghies in the first place was the prize I found for Free Stuff Fridays. I picked up – yes I did – an original Peroghy Pogy, still in the package and with the old Woodward’s price tag. QUIK-N-EZEE! CERTAIN & SIMPLE! Even YOU can make dozens of peroghies from scratch for pennies apiece. Preferably at a long, floury countertop with people you love and a bottle of wine. Enjoy – life is too short to not savour every moment.

Speaking of unique ways with summer fruit, what are your favourite things to do with berries, rhubarb, stone fruits… anything sweet and juicy that says summer?

One Year Ago: Croque Monsieur (aka Mr. Crunch)