I had been noticing some sort of berry growing in abundance up and down every path, and over the past week they have been turning a more alluring shade of wine-purple, hanging all lusty and low in clusters, like teeny grapes with a little more breathing room.

Every time I stopped to examine them and wonder aloud what they might be, Mike would put his head down and walk faster. 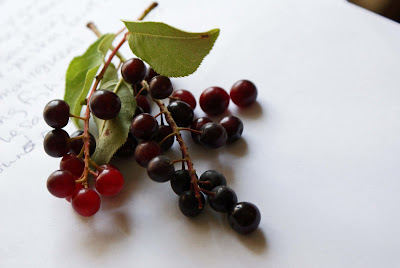 Through the miracle of Twitter, I brought a few home, photographed them and sent them out into the ether, inquiring to all what they might be. The answer came back: chokecherries. Chokecherries!! I always wondered about chokecherries, some neighbours assumed aloud that they were the same as Nanking cherries, and I had no reason to not believe them. But these are much darker, and smaller, with very little flesh that sucks the moisture out of your mouth when you eat them.

Tonight we went back to cool off boy and dogs in the river, and as I walked down the wooded path I stripped chokecherries from their stems by the handful, filling a spare poo bag quickly. (To onlookers at the river, I had the biggest sack of poo ever.) Buckets of them hung from branches at every bend, turning so dark that soon they’ll get boozy and the dog park will be the place for the magpies to hang out on Friday nights.

When we got home, we popped on a movie and I popped a pot on the stove to make -what else?- jam.

And so I decided that I should address the issue of making jam without a recipe. Really, you don’t need the mathematical formula the little folded sheet (that unfolds to poster size) inside the pectin box suggests you do, nor often the pectin itself. I’ve been doing up small batches all month – raspberry from my sister’s garden (above), Nanking cherry, huckleberry, and now chokecherry. This summer we missed out entirely on the strawberries. 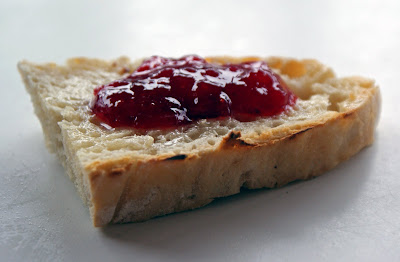 Although fruits have been preserved in sugar for thousands of years, people have only in recent decades developed a fear of jam-making. The common opinion has come to be that jam is difficult to make, difficult to set, and will take the better part of a day (or at least an afternoon) to procure. Not so. And although a jar of jam can be easily had at any corner store, it really is worth the effort to simmer some fruit yourself. Fruit + sugar = jam.

If you are among the nervous, take comfort in the fact that runny jam is perfectly acceptable; delicious, even. (I far prefer a loose jam to one that resembles stiff Jell-O.) If it’s exceedingly runny, you have yourself a lovely fruit syrup, one that will enliven pancakes, waffles, ice cream, fresh biscuits and angel food cake – just pretend that it’s exactly the way you intended it to be.

To get all scientific about it: the main components of jams and preserves are fruit, sugar, pectin and acid (such as lemon juice). Fruits vary in their pectin content, but typically under-ripe fruit (such as strawberries with white spots) contains more pectin and acid, both necessary elements for the jelling process. (Fruits higher in pectin include apples, currants, oranges and plums; middle-of-the road fruits include blueberries, raspberries, cherries and rhubarb; low-pectin fruits include apricots, peaches and strawberries.) Commercial pectin can always be used as extra insurance, but isn’t really necessary. Apples (with their seeds) and citrus peels are high in pectin – I’ll often add some to the pot (if I’m straining the mixture to make jelly) or wrap in cheesecloth to simmer, then pull out after the mixture has cooked.

When making jam, aim for 1 cup sugar to every 2-3 cups chopped fruit. You’ll want to cook them together, rather than cook the fruit and then add the sugar, as the sugar helps pull water from the fruit but leaves the pectin. Add about a tablespoon of lemon juice per pound of low-acid (as in, not oranges) fruit.

Bring the lot to a rolling boil and cook, skimming off any foam that rises to the surface, until it thickens and looks like loose jam. (Keep in mind it will firm up as it cools.) To test, either use a candy thermometer (it will set at around 220°F) or drop a spoonful on a small dish you’ve chilled in the freezer. If it sets up into something that resembles jam, and wrinkles on the surface when you push it with your finger, it’s done.

My method is to spoon the hot jam into fresh-from-the-dishwasher jars that are still warm. Seal, and the lids will pop in as they cool. You’ll know any have spoiled if the lids pop out again. If any don’t seal properly, store in the fridge or freeze. 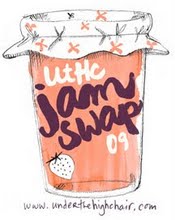 If you’re a jam fan, whether you’re looking for recipes or making it yourself, come join the sticky fun at Jam Swap 2009, the brainchild of (and hosted by) Aimee of Under the High Chair!

One Year Ago: Roasted Sausages with Grapes and Onions

76 comments on “Jam Without a Recipe”