Whether you call this a sno-cone or a granita depends on who’s eating it.

I don’t know about you, but my interest in a watermelon generally lasts until about halfway through it. Especially if it’s big, and especially if it’s woody and pulpy, in which case I vow to return it to the store, but never do.

In the past I’ve made watermelon lemonade, which is just fine. I always intend to make watermelon margaritas, but have yet to. This summer, however, I discovered that if you puree a watermelon (chunk it and blitz in the food processor – because it’s mostly water, it pulverizes effortlessly) and freeze it, you can scrape it with a fork to make pure-fruit watermelon sno-cones; known among fancy-food eaters as granitas. 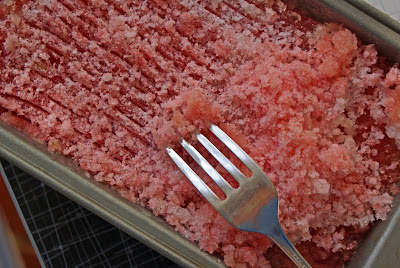 Honestly, nothing could be easier than a granita. Freeze fruit puree, or fruit juice, scrape it with a fork so that you get a sort of crystalline snow, and voila. In midwinter, I have been known to leave half a latte in the car, then scrape it out and call it espresso granita.

I made a batch with cherries and watermelon, and a batch with a splash of prosecco. (This version would be granita, obviously, rather than sno-cone.) Not many recipes are so easily played with. Just remember this one rule: if it freezes, you can make a granita out of it.

But watermelon, straight up, makes a mighty fine sno-cone, without any need for day-glo syrup.

One Year Ago: Chocolate Éclairs with Espresso Mascarpone Cream

Jam Without a Recipe