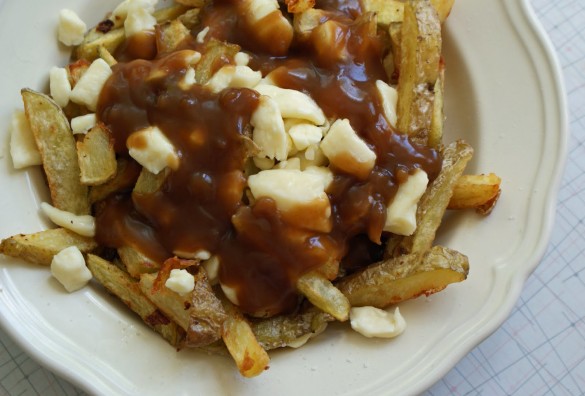 Ah yes, I am Canadian. You can tell by the fact that I had poutine for breakfast. Three kinds, even.

In honour of Canada Day – which is, impossibly, coming right up – I give you poutine you can make at home. I know you’ll need a day to locate cheese curds – you can find some at Springbank Cheese (which has no connection with the Springbank outside Calgary, I’m afraid – it was named after a cow. Sorry. They are in Ontario though.) or at Say Cheese! at the Crossroads Market (both sell packets of St Hubert’s poutine mix too), or really any good cheese dealer. It must be curds though – don’t go grating mozzarella on top and defacing a Canadian icon. 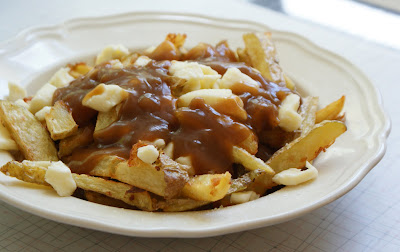 I used that new French fry technique I told you about – and as they simmered themselves to golden perfection on the stovetop (pure poetry, that) I went about assembling toppings – I made some topped with pulled pork and barbecue sauce, and another topped with mushroom and Guinness gravy. A third had Montreal smoked meat hacked apart and added along with the curds. You could do a beef bourguignon poutine, or make it Italian style with marinara sauce. You could top yours with a fried egg, or a chunk of foie gras. I think a baked bean poutine is in order next – not only because I think beans are great, but because I like saying bean poutine.

So really, all you do to make your poutine is have the sauce and curds ready as your fries come out of their oil; drain them on paper towels, salt them and top right away with curds and sauce (or gravy, or whatever) so that the curds melt ever so slightly, and serve to deserving recipients. How to win friends and influence people, the Canadian way.

One Year Ago: Waffled French Toast
At the Family Kitchen: Maple Bran Waffles

Tony’s Pizza and Culina in Edmonton