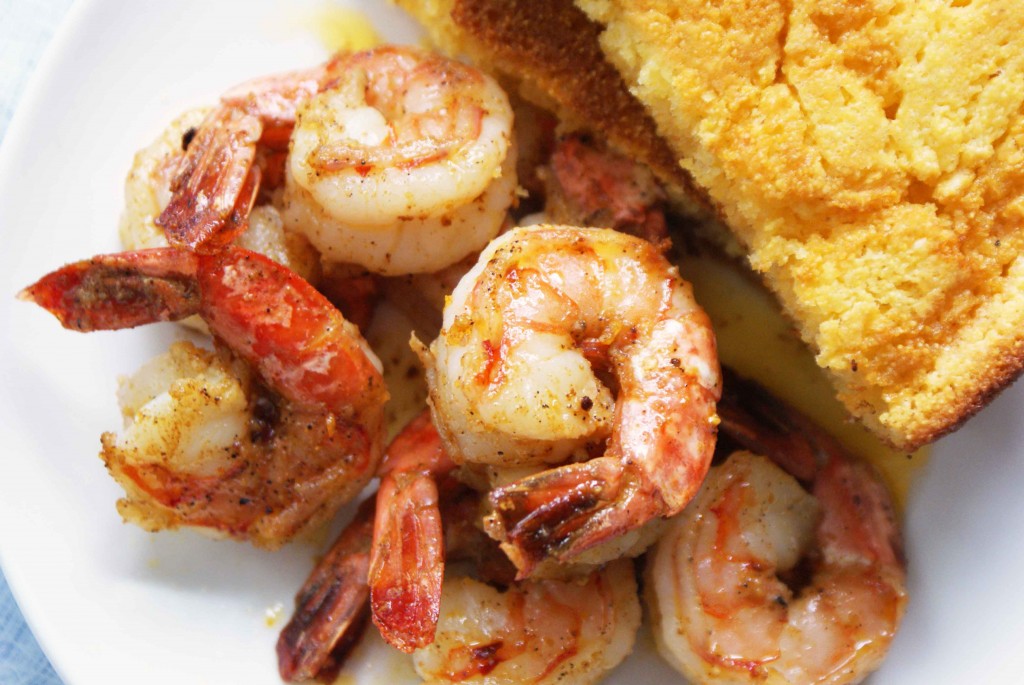 There hasn’t been much cooking this week – there have been late nights and early mornings and an emergency dentist visit. I’ve been simultaneously catching up from being away in Austin and getting stuff done before we leave for California. Feel free to hate me – I might.

I’ve been on the afternoon show on CBC all week too, which means being in the studio until 6, with not much motivation to cook by the time I get home. On one of those nights-I’m not sure I can distinguish which-I ran some raw, tail-on shrimp from the freezer under warm water in a colander to thaw them while I got changed out of my work clothes, and had almost the same barbecue shrimp we always order at Memphis Blues in Vancouver. It turns out all they do is saute them in plenty (plenty!) of butter (I was a little more stingy) and a good shake of their all-purpose dry barbecue rub. They serve them in shallow bowls, swimming in salty butter, with wedges of cornbread, and they are divine. It’s a good thing Vancouver is so far away.

You could of course use any spice rub – the same you might use for ribs, brisket, pulled pork and the like – or a curry or tandoori blend. Heat a generous pat of butter in a heavy skillet, add a drizzle of olive or canola oil and when the foam subsides, throw in as many raw, peeled, tail-on shrimp as you want to cook. Add a generous shake of the rub. Toss them about in the pan for a couple minutes, just until they turn opaque – don’t overcook them, or they will curl up tight and end up tough – pour into a shallow bowl and serve with cornbread or crusty bread, for mopping.

And then, while the boys are at grandma’s for a sleepover, crawl into bed before midnight for crying out loud.