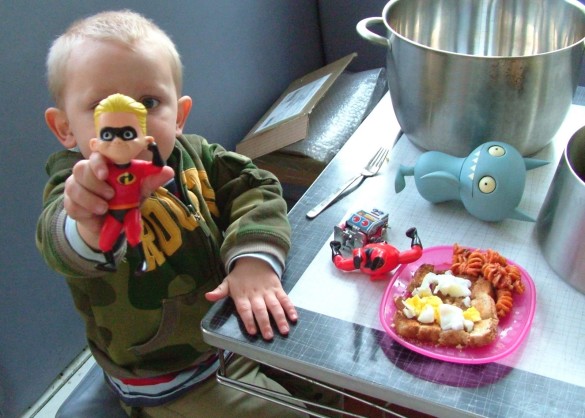 I was chatting to some other moms yesterday while our kids scrambled for chocolate eggs; on the subject of finicky eaters it became quickly apparent that some of you may be under the misconception that what ever I make for dinner, Willem will happily eat.

Ha. Let me relieve you of that crazy notion right now.

We do, however, generally insist that he at least try a bite of things. Kids love repetition in their food as much as in their Disney movies, so it’s easy to fall into the “my kid will only eat chicken fingers and hot dogs” trap. If we let him, W would live on meat, buns, peanut butter spoons and eggs and toast, unless an all-candy and ketchup diet was an option. (What’s a peanut butter spoon? It’s a small spoon, dipped in peanut butter to then be licked off like a puppy. Hey, it has protein and good fats.)

Green Eggs and Ham has actually been quite effective in convincing him to try stuff. He spent the afternoon trying to persuade our chef neighbor to taste an avocado.

Tonight we went for dinner at Mike’s mum’s house, and she made Cornish hens (teeny tiny turkeys: one each, with Stove Top and seasoning salt) and W tore the legs and wings off all of them, and that’s all he would eat. Any onlooker might have thought we were poisoning him with the two bites of peas we managed to convince him to eat by overenthusiastically quoting Green Eggs and Ham: “you will like it, you will see – you will like it in a tree!”, and so when we got home we pulled out the tomato sauced whole wheat rotini we keep in waiting for such occasions, and his beloved (poached) eggs on toast, which has become the standard fare he asks for anytime he’s hungry.

Day 82: Leftover Yeast-Raised Waffles (and far too many cinnamon-phyllo nests with chocolate eggs)