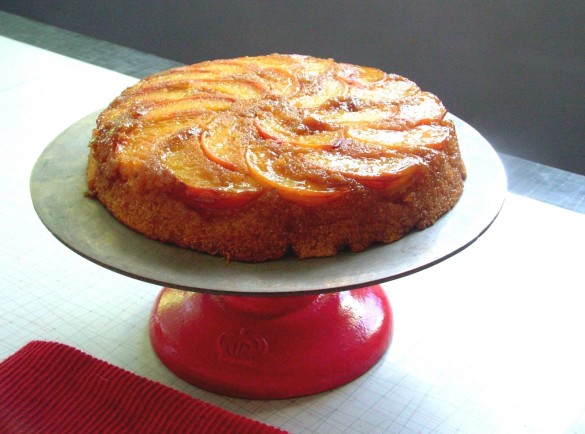 No, that wasn’t all dinner. I’m in the habit now of sliding back into lunch, and realizing how often these days we sort of graze mid-afternoon, which then often takes over our appetites for dinner. I ended up at my sister’s for dinner tonight, which was sort of impromptu and as such I didn’t happen to have my camera with me. Quel désastre! But it’s OK, we had tacos, and you all know what tacos look like. But then she went and made Nutella crêpes for dessert with our coffee, and wow, they were so pretty I had to share.

So I made her make one for me to take home so that I could a) take photos of it, and b) score some serious Nutella crêpe points with Mike.

I must pause here to air my many grievances with Nutella. I adore the stuff, but don’t buy it – I cannot stand advertisements that extol the virtues of a spread “made with wholesome hazelnuts and skim milk” (I have heard of people actually going to buy some as a healthy alternative to peanut butter) when the first two ingredients are sugar and modified palm oil. Further, the product claims to be “all natural” – remember the second ingredient? Modified palm oil. Where does modified palm oil exist in nature? So it is far more accurate to describe Nutella as a not-so-wholesome spread made with sugar and modified palm oil than one made with nuts and skim milk (it’s skim milk powder, which I’m pretty sure doesn’t pour out of a jug the way it does on the commercial). But of course that’s not what marketing’s all about. Bernard Callebaut, by the way, makes a splendid version made with 50% hazelnuts and 50% BC chocolate, and that’s it. And it’s phenomenal.

But my sister put a warm Nutella-stuffed crêpe in front of me and I had to eat it. I’m so ashamed. But just look at it. As I may have mentioned, it was warm. But I do think that anyone should know how to make a crêpe. The batter is about as easy as you get – she uses the Joy of Cooking crêpe recipe and whizzes the batter in the blender, which makes it easy to pour directly onto a hot skillet. Crêpe batter should have the texture of heavy cream – both of us always think our batter is too thin at first, but it never actually is. My favourite way to eat crepes has always been spread with soft butter while hot, then sprinkled with brown sugar and cinnamon and rolled up into a cigar. Or so I thought.

It just this second occurred to me how brilliantly the strawberry-rhubarb compote in my fridge would taste folded into a crêpe; I have always found jam too sweet on a crêpe, but this will be perfect. Great. Welcome to Crêpe Month.

extra oil, butter or nonstick spray for cooking with

Pulse the milk, eggs and butter in a blender until foamy or whisk until well blended; add the remaining ingredients and pulse or whisk until smooth. Let the batter sit for half an hour.

When ready to cook, preheat a large skillet or griddle and brush it with butter or oil or spray it with nonstick spray. Pour about a quarter cup onto the skillet and tilt it around so that it runs into a circle. Cook until the top loses its gloss, which should only take a minute or two, then flip. The bottom should be golden. Cook the other side for about 30 seconds and then slide out onto a plate. Keep warm in a 250F oven or serve right away spread with butter, sugar and cinnamon, jam or nutella, and folded or rolled up.

And then there was cake. This afternoon we ended up having round 1 of W’s third birthday party. Since his birthday is on August 4th, which for his entire life has fallen on the August long weekend, most of his friends and cousins are out of town. So this afternoon we had a small party for those who are about to leave on their vacations, and I made a peach and cornmeal upside-down cake after seeing one, I’m a bit embarassed to admit, in this month’s Martha Stewart Living. I started to make it (I love cakes that I can bake in my cast iron skillet) and ended up making so many adaptations that it doesn’t much resemble the original, which was spiked with lavender.

The best thing about this cake, which I loved because it wasn’t too sweet and didn’t require decorating, was the sugary crust it developed as the butter and sugar bubbled up around it as it baked. I can’t wait to try it with blueberries. We bought an ice cream ball that the kids kicked around the yard to churn brown sugar ice cream to go with it. This part was easy – add 2 cups half & half, 1/4 cup packed brown sugar and a few drops of vanilla to the inner container, add ice and rock salt to the outer, and keep it moving until it freezes. This can also be done in a big coffee can, with the ice cream mixture in a smaller one well-sealed inside it. Melt half the butter in a 9″ or 10″ cast iron skillet, cake pan or pie plate. Add 1/4 cup of the sugar and stir until completely melted. Slice the peaches into wedges and arrange them in the skillet, fitting them snugly together – remember that fruit tends to shrink as it cooks. In a small bowl, stir together the cornmeal, flour, baking powder, baking soda and salt; set aside.

Spread the batter over the peaches and bake for about 30 minutes, until pale golden and the top is springy to the touch.

Honestly, I have no idea why my pants don’t fit anymore.

Day 207: A sandwich from the Italian Market

6 comments on “Day 206: Tacos, Peach and Cornmeal Upside-down Cake and Crêpes with Nutella”