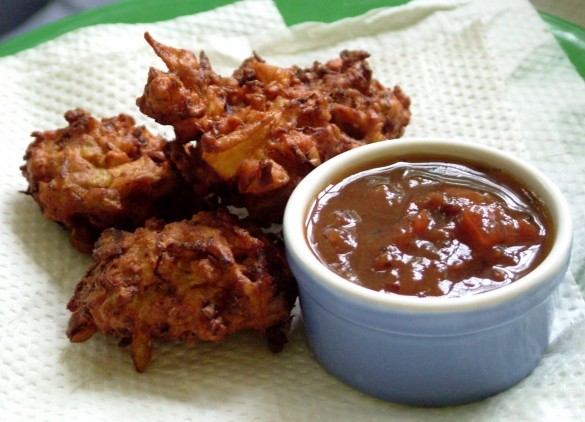 Sometimes when I spell out my dinners they sound far fancier than they were; other times they just come across as weird.

My sister came over for dinner tonight, and I had planned to make a quick shrimp curry, but when the possibility of my 18 year old nephew joining her arose, I wanted to tip the scales in favour of him coming and so switched the menu to burgers. There were a bunch in the freezer leftover from Stampede that weren`t going to eat themselves.

But I went ahead with the pakoras: one of the foodstuffs that came my way as my Mom purged her kitchen cupboards was half a bag of Chatty`s Pakora Mix – something it would probably never occur to me to buy, but she had brought home from the Bay or some odd place and said the pakoras is made were actually pretty tasty. The ingredient list is pretty innocent, as far as mixes go: chick pea flour and spices, really. (They were smart enough to not list the spices, so I can`t go and recreate it myself.) It`s a Saskatoon company, so I really don`t mind just buying a bag. Sometimes the unknown just tastes better anyway. 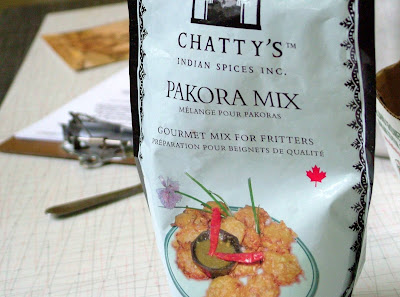 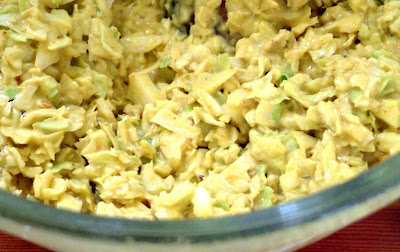 All you do is blend the mustard-yellow mix and water into a paste, then stir in finely chopped onion, potato and cabbage – I cut one onion, three small (unpeeled) Yukon gold potatoes and a wedge of cabbage into chunks and blitzed them in the food processor into smallish bits – and fry the barely coated veg in about an inch of canola oil. I made sure I had a jar of chutney to go with – coincidentally it was the same brand – a jar I got in my stocking at Christmas of Chatty`s Tomato & Fruit Chutney. Now listen to this ingredient list: tomatoes, sugar, vinegar, apples, apricots, dates, prunes, raisins, ginger, salt, spices and olive oil. Who needs pakoras when I have a drawer full of spoons?

It would appear that both of us have inherited our Dad`s desperate need for something sweet after dinner because later, as we sat drinking our Tim Horton`s coffees, we were both distracted by the thought of chocolate chip cookie dough. So we made some; a small batch, to enforce portion control. 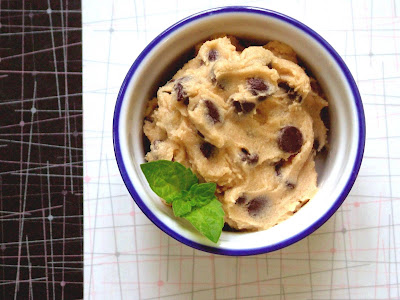 Me: Should we really bother baking any of this?

A: You should just serve it straight up in individual ramekins, and take a picture for your blog. (Exit stage right to the garden to retrieve a photogenic sprig of fresh mint.)

And so we did, with small teaspoons for transport. (We like to class things up a little.)