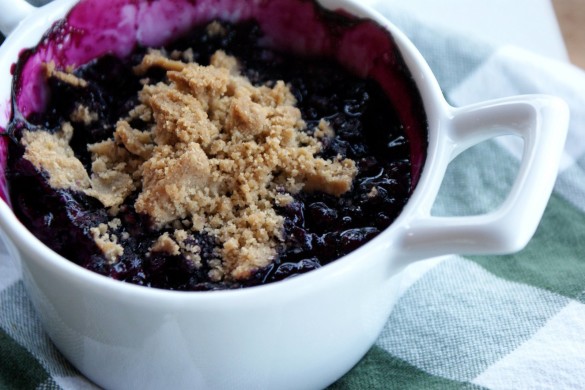 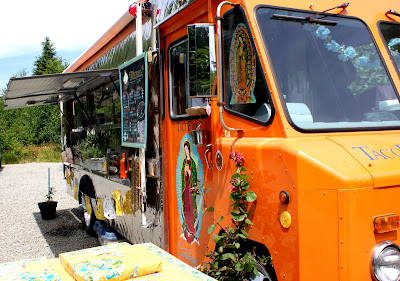 The property surrounding my parents’ house is thick with all things growing, as you might find most anywhere in BC – green things growing between the toes of other green things. I am not one for identifying plants, like my mom and sister are; they are the type to walk down the street and coo: “ooh, look at those hostas! Mine just aren’t happy this year. I’ve never seen asters that colour!” (I don’t even know if asters come in colours – see, I don’t even know enough about gardening to make fun of their smarts.)

But I do know my edibles. I scanned the grounds for any sign of blackberries (some, but not ready yet), blueberries or red currants. Halfway down the stairs I found a pair of treeish shrubs covered with ripe red berries, one so heavy it reminded me of a cow we saw at the dairy on the way here, her udder so full it nearly touched the ground. We had seen someone walking along the side of the road, branch of such in hand, snacking on the berries, so we figured they were edible. I still wanted to know what they were.

A flip through a copy of Mom’s PLANTS OF COASTAL BRITISH COLUMBIA identified them as red huckleberries – sort of a happy combination of red currant and Nanking cherry, without the pit. When I excitedly reported our positive ID to Mike, a look fluttered across his eyes that I recognized as “great. I’ve lost her for the rest of the trip to a tree.” He knows me too well.

Yes, I do tend to become obsessive in the presence of ripe, free-for-all berries. When we lived in Vancouver we had our secret spots where we’d go and pick blackberries for hours (I always wondered why more people didn’t do this – do they realize the street value of those berries in Calgary?) and I have been known to jump out of the car at a red light or make Mike pull over by the train tracks to go load up an empty Starbucks cup. Here, the loaded tree was just beyond reach of the wooden walkway, so that I had to venture out onto a fallen tree that was so deeply surrounded by ground cover I had no idea how far down it went below. I crept out further and further, lured by berry-covered branches, closer to a known raccoon den, until I half-filled my basket. (Actually the insert from the salad spinner – perfect for rinsing berries afterward.) 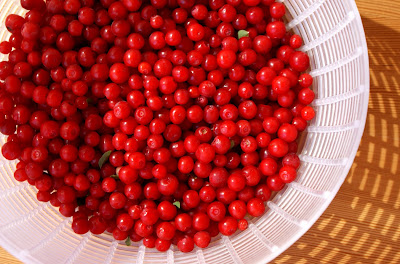 My dad suggested they might make a nice crumble paired with blueberries, and he was right. They are tart but not so much that they need sweetening, especially with blueberries as a buffer. I filled a larger bowl for us and a smaller one for our neighbours, one of whom is celebrating his 87th birthday tomorrow, and did absolutely nothing to them but scatter a crumble mixture over top – this time it was soft butter the size of an egg (this is the way my grandma would measure it in her hand-written recipes), about twice as much dark brown sugar, two or three times as much flour, and a shake of oat bran. 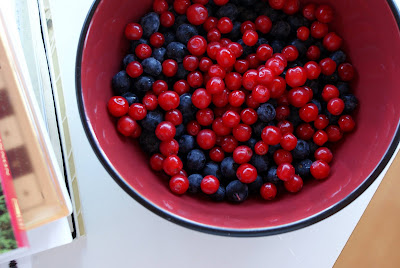 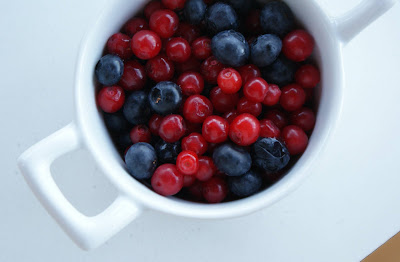 I never measure the crumble part – you can always add more flour or more butter or oil if you need it until you get a crumbly consistency – something that holds together when you squeeze it. I loved the addition of oat bran – not as much texture as full-on oats, but with the nuttiness and fiber. I baked them both at 375F until the topping was golden and the berries bubbled up around the edges. 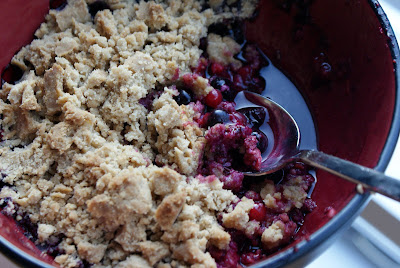 I don’t think I quite captured the colour here – the berries burst and turned into a sticky, jammy, brilliant red-indigo sauce. We ate it by the fire, with whipped cream. (Oh whipped cream, I’m going to miss you most when we go home.) I was hoping for leftovers to eat for breakfast with vanilla yogurt – no such luck. 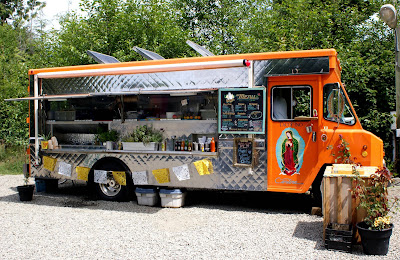 And – I’ve been holding out on you – we have been eating more than just fruity crumbles and coffee. We ate, for one, at the new Tacofino – (not actually the old purple SoBo bus, despite rumours to the contrary) – a catering truck painted orange, parked in the same place (at the back of the Tofino “mall”) and doling out burritos, tacos, salads (next time I’ll try the chipotle Caesar) and the like. My favourite, I think, were the bean gringas – sort of like a creamy, cheesy folded quesadilla, made, as all menu items, with chicken, pork or beans. The burrito was pretty fantastic too, and I liked that you had the option of a whole wheat tortilla. The tacos were made using soft corn tortillas. You had the option to add rice and beans, sour cream or guacamole. (I missed that part until it was too late.) 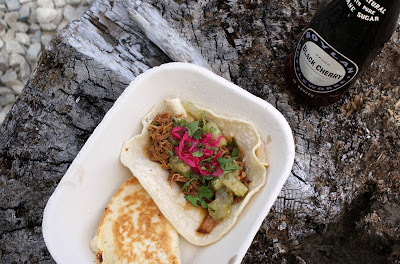 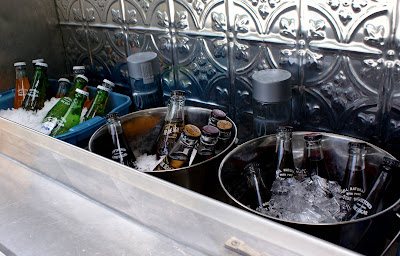 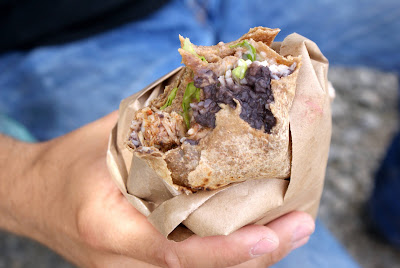 My favourite is W’s shot of the bus and sky – shot from our stump seats where we ate. I particularly like that little bird sitting in the tree. 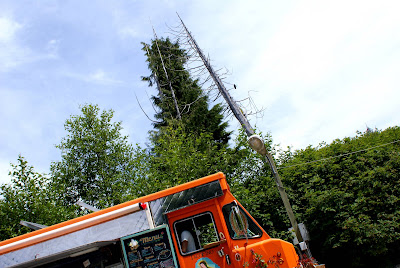 One Year Ago: Pad Thai and Vanilla Barley Risotto with Strawberry-Rhubarb Compote

15 comments on “Blueberry-Huckleberry Crumble and Tacofino”