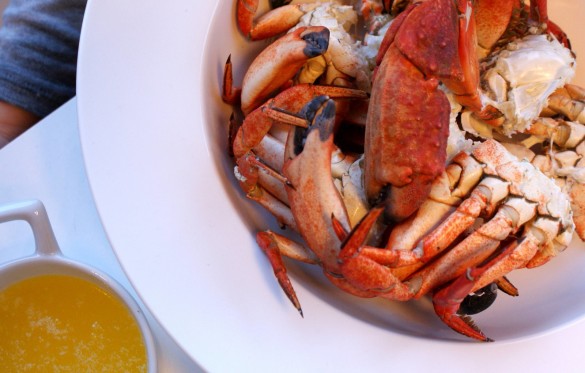 If I’m to be perfectly honest here, yesterday was a bit of a dud. (Excepting, of course, the fact that we are in Tofino.) We spent the morning trying to rally the troops to vacate the house so that I could tape a segment for Good Bite, silly me, thinking I could evacuate ten people and hope for a half hour of silence and a dry towel to shower with beforehand. And when I finally managed to get it done at around noon, I had a phone meeting and spent an hour searching for lost car keys, thus missing out on a trip to the beach, and then spent until dinnertime trying to download and then upload my enormous video files using my Mom’s laptop and an internet connection that would time out or crash anytime I opened something else, or if I didn’t and the computer went to sleep, or if I blinked. By 7pm I had hardly seen the light of day, a cold had moved in and unpacked its phlegm into my head and lungs, and I was ready to row both laptops out into the ocean and hurl them overboard. 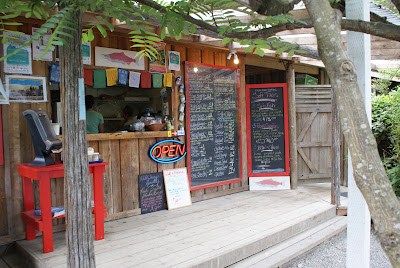 Thankfully, the day was salvaged by a trip to Wildside Grill for dinner – an open take-out or eat-on-driftwood-benches spot in the little cluster of shops by Beaches grocery on the way into town. (Or as locals call it, Tofino Mall.) They have a cod club that is made with a slab of crisp, panko-crusted cod, thick, salty bacon, tiny rock shrimp, avocado, mayo, lettuce and tomato that I could eat very happily every day this week. There are some fantastic places to eat out here, but I do love those spots that have tables made out of giant wooden spools painted red and dented dog bowls set between the trees, where Lou can lie at our sandy flip-flopped feet while we eat. 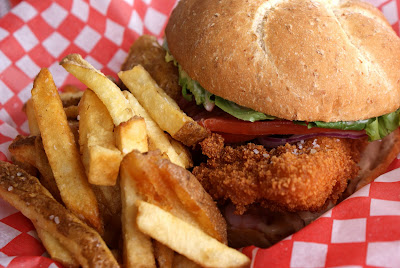 We also tried the spicy fish tacos, a trio wrapped in corn tortillas and stuffed with spicy chunks of salmon with rice and Monterey Jack, covered with a fresh tomato and purple onion salsa, guacamole and cilantro. But the club trumped everything, and totally made my day. 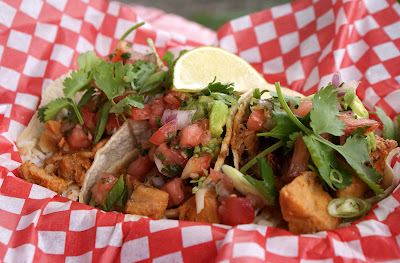 Today was much better. We went down to Schooner beach, which is accessible by a kilometer-long boardwalked trail through rain forest. (No, rain forests aren’t necessarily rainy.) 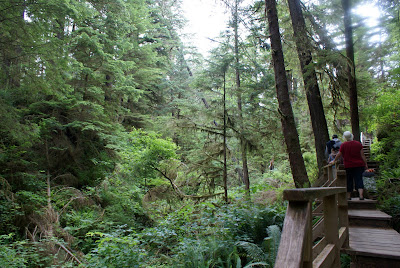 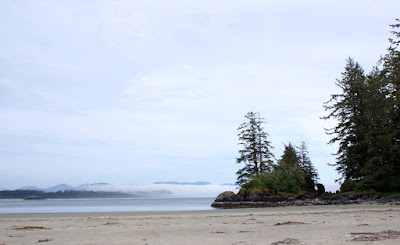 The sun came out, no one was cranky, and to ice the cake we saw whales. Finally, after I don’t know how many trips out to the west coast and only ever having witnessed little splashes in the distance that could have been any number of things, we watched minke whales and what we guessed where grey or humpback whales smoothly arching out of the water and even sort of half breaching out beyond the inlet. Mike and Lou trekked out to the furthest rocky point they could find, winding up about a hundred feet from the action for at least two hours; my sister and I waded out into the warm water on the sandy slip and watched in the waist-deep ocean. Having set off down the beach to get some exercise and figure out where Mike disappeared to, I of course didn’t bring my camera. 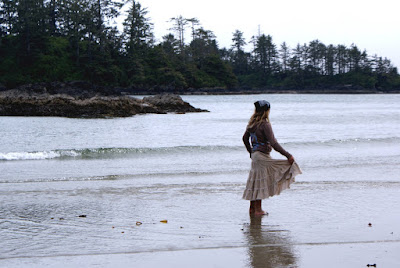 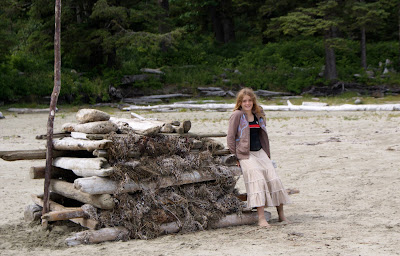 For lunch, we brought black bean salsa, corn chips and ripe avocados, fresh baguettes, peaches and plums to eat on the beach. 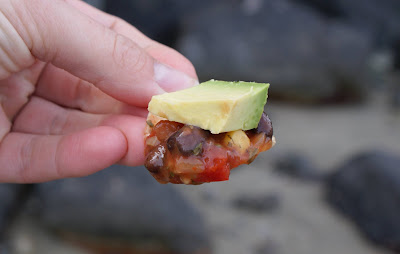 And when we arrived home at dinnertime my 18 year old nephew and his friend had gone out and caught crab in Clayoquot sound, having paddled out in the kayaks early in the morning to drop their trap. Mike set up a killing rock down by the water, from which I’m certain anyone within a hundred mile radius could have heard the kids squealing “eeeeeeeewwwwwwww! that’s disgusting! EEWWWWWWW!” as he karate-chopped them in the solar plexus, hacked them in half with a hatched and flicked out the icky bits, leaving an ice cream bucket full of half-racks of legs. We steamed them in our largest pot (a couple inches of water for 7-8 minutes) and ate them with loads of butter and new potatoes, which we boiled, smashed with a fork and fried up in a little canola oil and butter to give them crispy bits.

One Year Ago: Roast Halibut, Corn on the Cob and Lemon Meringue Pie

So Far So Good

15 comments on “A Crispy Cod Club, then Steamed Crab”